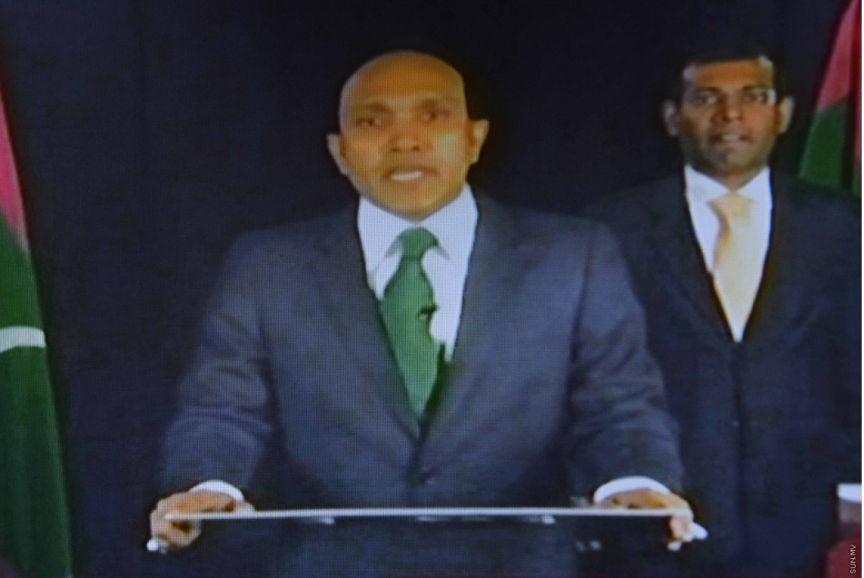 Former President Mohamed Nasheed looks on as Dr Jameel speaks. Jameel has stated that Nasheed should take responsibility for the events and damages sustained on February 8, 2012

Former Vice President Dr Mohamed Jameel Ahmed stated that former President and current Speaker of Parliament Mohamed Nasheed should take responsibility for the arsons all over the country on February 8, 2012, a day after he resigned from Presidency.

In February 2012, after a series of protests escalated, leading to clashes and violent attacks, in which officers from both Maldives Police Services and Maldives National Defense Force (MNDF) were partaking on the roads as well.

Due to this, Nasheed handed in his resignation but has maintained that he was forced to. He led a large-scale protest, that ended with arson attacks and violence.

Dr Jameel noted that the events of February 8 cause irreversible damages, and added that the amount, would be close to MVR 500 million.

“Vehicles and buildings were damaged.”

Highlighting that a lot of important documents were lost due to the fires, he stated that many court documents such as marriage and divorce certificates were burnt as well.

Furthermore, Jameel said that in a democracy, apologizing was the polite thing to do in circumstances where the leader loses control of things.

“So, MDP needs to apologize from the people.”

Moreover, reminiscing on February 8, 2012, Jameel said that it was Nasheed’s attempts to not follow ‘rule of law that started that chain of events leading to that day.

“Actually he (Nasheed) resigned to so that he could act from outside of ‘rule of law.”

'MDP threatens democracy in the name of democracy'