Op-Ed: India emerges as a global actor during the pandemic crisis 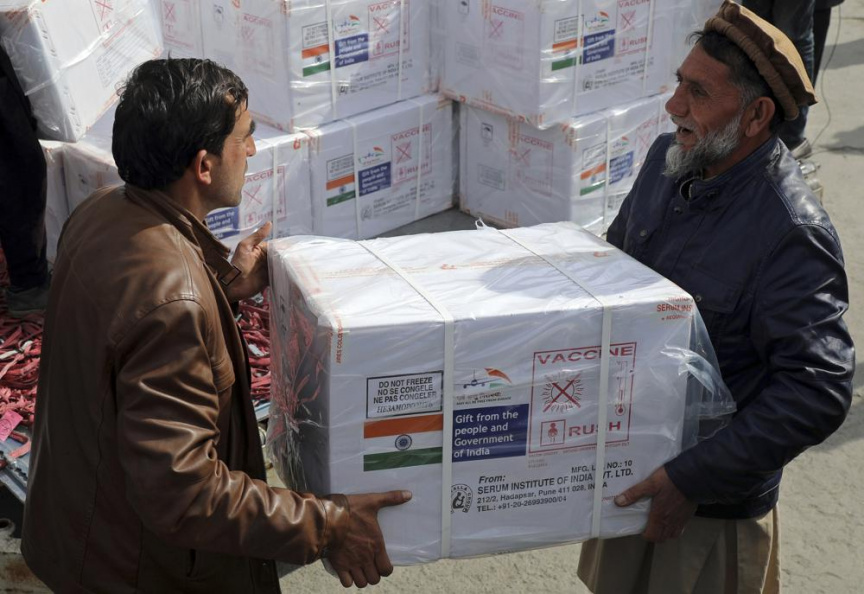 Afghan health ministry workers unloads boxes of the first shipment of 500,000 doses of the AstraZeneca coronavirus vaccine made by Serum Institute of India, donated by the Indian government, at the customs area of the Hamid Karzai International Airport, in Kabul, Afghanistan, Sunday, Feb. 7, 2021. (AP Photo/Rahmat Gul, file)

The following is an op-ed written by Amb. Ashok Sajjanhar.

The world had been witnessing a rapid flux in geo-politics and international relations over the past few years. These trends became much more pronounced in 2020 with the advent of the corona virus. At the beginning of 2021 the world was looking at the coming year with some hope and optimism. However, last year witnessed the eruption of the most devastating Delta variant in March, 2021. Today the world is staring at the havoc being perpetrated by the new Omicron variant.

Under these demanding circumstances, India has taken several bold steps to emerge as a global leader in many significant areas. Not only has it been able to effectively handle the numerous challenges domestically but it has also resolutely moved to extend a helping hand to many foreign partners to ameliorate their suffering. This is in keeping with Prime Minister Narendra Modi’s assertion at his first Address to the UN General Assembly Session in September 2014, soon after assuming power, that India’s foreign policy is governed by India’s age-old maxim of ‘’Vasudhaiva Kutumbakam’’ (The World is One Family).

One year ago, on 16th January, 2022, India set out on the formidable journey of vaccinating its huge 1.38 billion-strong population against Covid-19. Over this period, more than 90% of the Indian eligible population has received the first dose and above 65% have received both the doses. Additionally, precautionary doses, commonly known as booster shots, are now being given to frontline workers and vulnerable individuals above the age of 60 years. Youth between the ages of 15-18 years started receiving their first dose from 3rd January, 2022. Vaccination of children between 12-14 years is expected to start soon.

Following the vision of ‘'One Earth, One Health’' propounded by PM Modi, India started sharing its vaccines with the outside world within 4 days of the commencement of its own vaccination drive. In accordance with the ‘’Neighborhood First’’ Policy enunciated by PM Modi at the beginning of his first term, Bhutan and Maldives became the first countries to receive 150,000 and 100,000 vaccines respectively on 20th January, 2021. Bangladesh and Nepal came next on 21st January, 2021. Myanmar, Seychelles, Mauritius, Sri Lanka and Afghanistan followed soon thereafter. Although India has not recognized the Taliban dispensation in Kabul since it took over power by force on 15th August, 2021, as has no other country in the world, it has not hesitated to provide, essential medicines including additional one million doses of Covid-19 vaccines and about 4 tons of life-saving drugs and equipment as humanitarian aid to Afghanistan. All these items were supplied to the Indira Gandhi Hospital in Kabul by air via Dubai and Iran as Pakistan did not allow use of its territory for overland transit to Afghanistan, which would have been the shortest and quickest route.

Supplies of vaccines were welcomed with deep gratitude by the recipient countries. Bhutan's PM applauded “the gesture that signifies compassion and generosity of PM Modi, and people of India for wellbeing of humanity." He added: “It is of unimaginable value when precious commodities are shared even before meeting your own needs. "Bangladesh Health Minister said that India had stood by Bangladesh during the Liberation War of 1971 as well as the pandemic. Nepalese PM thanked PM Modi and the Indian government for the “generous grant...at this critical time when India is rolling out vaccination for its own people.” Brazilian President thanked PM Modi. Prime Minister of Dominica said after receiving the COVID19 vaccines: “I must confess that I did not imagine that the prayers of my country would be answered so swiftly." United Nations Secretary-General Antonio Guterres termed India’s vaccine production capacity as the “best asset”, the world has to fight the pandemic. US State Department; PM of Mauritius; DG, WHO; Bill Gates and several others spoke appreciatively of the selfless manner in which India helped several developing countries with the vaccines.

India had to temporarily curtail these supplies when the second wave of the virus struck India in April, 2021 but they were resumed as soon as the situation and supplies normalized.

India assumed the two-year non-permanent membership of the UNSC on 1st January, 2021. It took over as President of UNSC for August, 2021. This provided India with an invaluable opportunity to enhance its credibility as a responsible stake-holder and a rightful claimant to the permanent membership of UNSC. India identified maritime security, peace-keeping and counter-terrorism as key issues for special debates during its presidency. Discussions on Maritime Security in different UN fora had been scheduled earlier but could not be conducted due to the high sensitivity of the issue. PM Modi decided to chair the Session on 9th August, becoming the first Indian Prime Minister to conduct a UNSC meeting. Russian President Putin attended the deliberations. The last time Putin attended such a discussion was in 2005! The month of August also witnessed the forcible assumption of power in Kabul by the Taliban. This put a huge onus on the Indian Presidency. India proved equal to the challenge. It presided over several discussions on the evolving situation and crafted Resolution 2593 which has come to represent the consensus view of the global community on actions that Taliban must take in the governance of Afghanistan.

The competent and deft manner in which India built consensus even amongst opposing parties during its Presidency significantly added to its prestige and influence.

India took several initiatives during this period to ensure that its growth in the coming years would be green, clean, sustainable and reliable. At the COP 26 Summit in Glasgow in Oct/Nov, 2021, India committed to the target of net zero by 2070. India, with 17% of the world's population contributes merely 5% to the global greenhouse gas emissions. As a result of efforts over past years, 40% of India’s energy generation is being contributed by non-fossil fuel sources. This emphasizes India’s commitment to sustainable development as it achieved the target under the Paris Accord, 9 years before the due date of 2030. India is the only G20 member which is meeting its commitments under the Paris Agreement. This has enabled it to emerge as a world leader in this critical area where earlier it used to be on the defensive.

India launched the most ambitious evacuation plan undertaken thus far in May 2020 under the “Vande Bharat’’ Mission to transport back Indian nationals stranded in different countries due to the Covid-19 pandemic. This was necessitated on account of lock downs and cessation of international flights by India and other countries due to the rapid spread of corona virus. So far about 50,000 flights have been operated which repatriated 6.7 million people to India and foreigners to their home countries abroad. In addition, the initiative “Samudra Setu’’ by Indian navy was launched to bring back around four thousand Indians from the Gulf and neighboring countries. Such a mammoth operation conducted in a remarkably seamless way significantly enhanced the image of India.

India registered significant progress in several other domains, both domestic and external, during the pandemic period. More than 10 thousand start-ups were registered in the last 6 months. India is promoting Ease of Doing Business, minimizing government interference. Last year alone, more than 25 thousand compliances were implemented. The number of startups which was a few hundred some years ago has crossed 60,000 today. It also has more than 80 unicorns, the third largest in the world, of which more than 40 were formed in 2021. During the Corona period, when the world was focusing on interventions like Quantitative Easing Program, India paved the way for reforms. The biggest projects to modernize digital and physical infrastructure got unprecedented momentum during the corona period. The US$10 billion incentive plan to roll out the fab, chip and display industry is a testament to India’s commitment to making the global supply chain seamless. India is marching forward with the spirit of Make in India, Make for the world. India today presents limitless opportunities in the fields of aerospace, telecom, insurance, defence and semiconductors.

In addition to the above, several other major initiatives were taken by India during this arduous period through launch of the Western Quad comprising of India, Israel, UAE and USA; strengthening of India’s ties with its neighbours, USA, Russia and other strategic partners; reinforcing the Quad partnership; hosting the Delhi Regional Security Dialogue and theThird India-Central Asia Dialogue which brought India center-stage to developments in Afghanistan, and many more. All these have enhanced India’s global influence and power and imbued it with hope, confidence and determination to promote peace, security and prosperity in the region and the world.

Amb. Ashok Sajjanhar has worked for the Indian Foreign Service for over three decades. He was the ambassador of India to Kazakhstan, Sweden and Latvia, and has worked in diplomatic positions in Washington DC, Brussels, Moscow, Geneva, Tehran, Dhaka and Bangkok. He negotiated for India in the Uruguay Round of Multilateral Trade Negotiations, for India-EU, India-ASEAN and the India-Thailand Free Trade Agreement.

He has worked as the head of National Foundation for Communal Harmony. He is currently the president of Institute of Global Studies in New Delhi. Amb. Sajjanhar writes and speaks on issues relating to international relations and Indian foreign policy.

Fire in commercial building in India kills at least 27