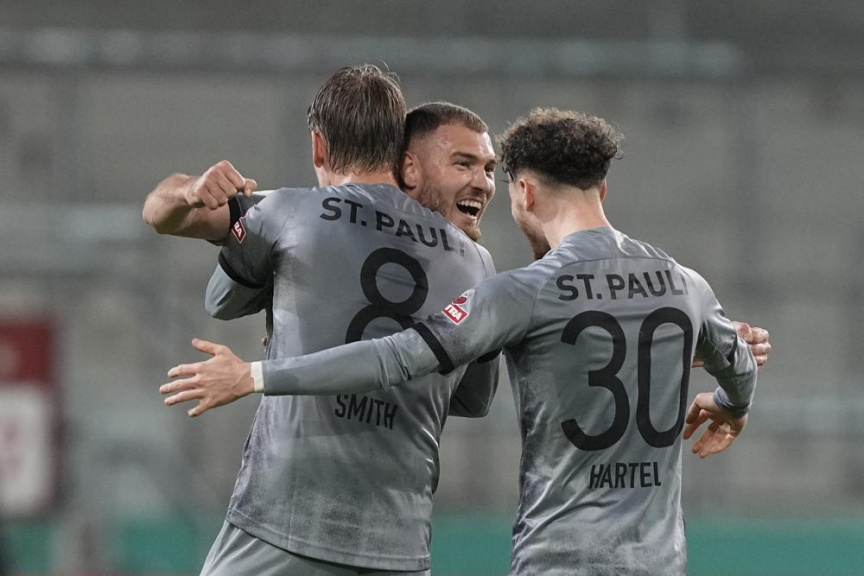 BERLIN (AP) — St. Pauli knocked defending champion Borussia Dortmund out of the German Cup with a 2-1 win in their third-round game on Tuesday.

It’s just the latest in what is shaping up to be a season of disappointments for Dortmund, which trails Bayern Munich by six points in the Bundesliga and was knocked out in the group stage of the Champions League.

“We simply have to take the next step as a team,” the visibly annoyed Dortmund coach Marco Rose said. “We have to bring energy into this game from the beginning because the title’s on the line, and that we didn’t manage that, it’s stupid.”

An early goal from Etienne Amenyido, an Axel Witsel own goal and resolute defending from the second-division leader ensured Dortmund joined Bavarian powerhouse Bayern as an early casualty in a competition that both were targeting to win.

Bayern was knocked out with a 5-0 loss at Borussia Mönchengladbach in the second round. Dortmund won last season’s final in May with a 4-1 win over Leipzig.

“We cannot defend the title we earned last year any more,” said Rose, who criticized his own team’s poor start. “It’s inexplicable and inexcusable.”

St. Pauli got off to a flying start with Amenyido opening the scoring in the fourth minute.

Dortmund pushed hard for an equalizer but was caught out again five minutes before the break when Witsel deflected Guido Burgstaller’s cross for the lurking Amenyido inside his own goal.

Erling Haaland pulled one back with a penalty early in the second half after Jakov Medić was penalized through VAR for handball.

St. Pauli’s defense held firm as Dortmund lacked a cutting edge despite its attacking firepower. Rose sent on 17-year-old forward Youssoufa Moukoko for three minutes of injury time, but it was Moukoko’s former club that progressed.

Only 2,000 fans were allowed in the 29,546-capacity Millerntor Stadium due to coronavirus restrictions. There was a big reception for the home team outside with flares and fireworks to show encouragement, and those allowed inside did their best to compensate for those absent.

Earlier, Hamburger SV reached the quarterfinals thanks to an unfortunate penalty kick from Cologne midfielder Florian Kainz in their shootout.

Kainz had to score with Cologne’s fifth penalty to keep his team in the game, but the Austrian slipped as he took it and his right-footed shot came off his left boot before looping in over Hamburg ’keeper Daniel Heuer Fernandes.

Referee Daniel Schlager ruled the score was irregular and ended the game with Hamburg winning the shootout 4-3.

Werner scores hat trick for Leipzig in win in GCup