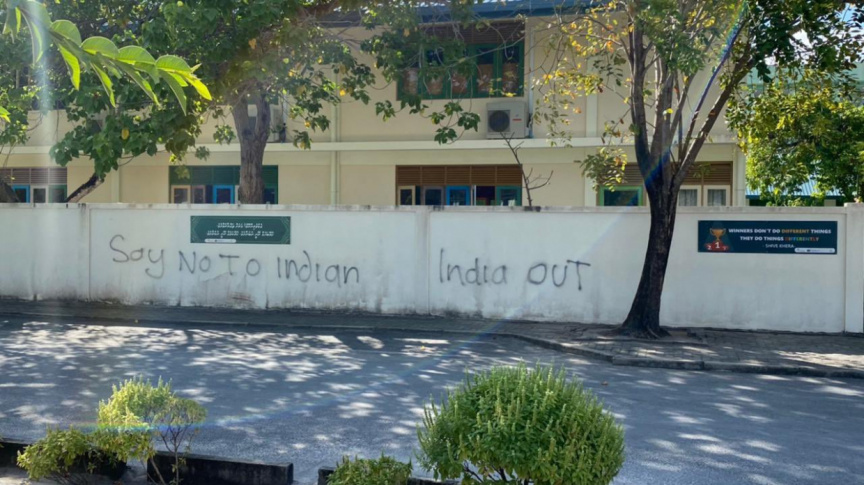 Graffiti at Sh. Funadhoo School's wall, reading 'India Out' and 'Say No To Indian'. (Photo/Social Media)

Graffitiing ‘India Out’ at Sh. Funadhoo School wall is currently under investigation.

‘India Out’ campaign is an initiative of the opposition coalition – which calls for the removal of Indian military personnel stationed in the Maldives. Last weekend, opposition coalition’s leader, former President Abdulla Yameen Abdul Gayyoom visited Sh. Funadhoo, following which protests were carried out at the island, under the campaign.

A photo showing ‘India Out’ and ‘Say No To Indian’ graffitied on the wall of Funadhoo School, has recently gone viral on social media. Members of the public have voiced out against the matter, noting a large number of foreign teachers are employed at the school.

“Will be taking the necessary actions after discussions with the relevant authorities,” he added.

Pointing out that such matters correlate to the future of students studying at the school, Ahmed Ali said that it triggers foreign teachers working at such schools to worry for their safety and security.

“They (Indian teachers) have been requesting at schools to ensure the safety. This is an extremely pressing concern. It correlated to the future of our children too,” he had said.

Speaking further, Ahmed Ali stressed that should foreign teachers feel unsafe, they would be averse to the idea of working in the Maldives – which will adversely impact students.