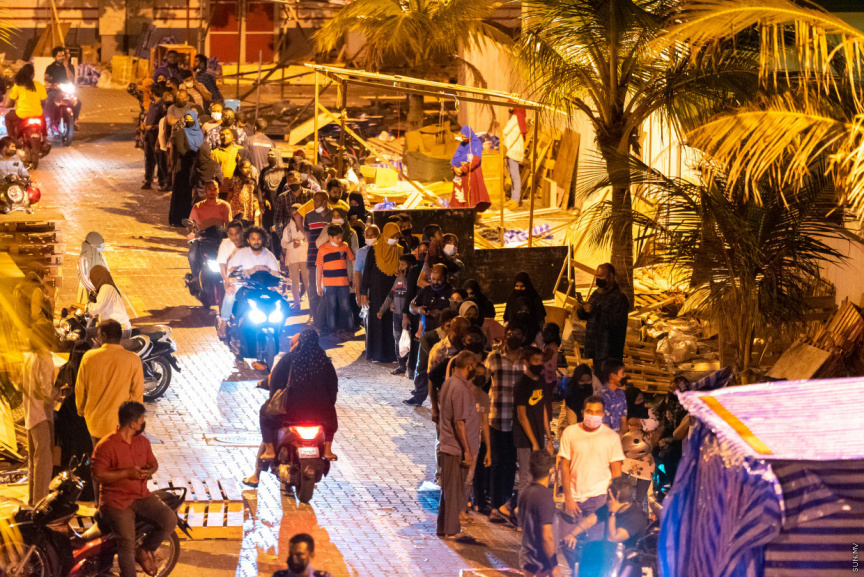 People were seen standing in long lines for hours, some with small children to get PCR-test done from the Social Center, the only location in Male that currently provide free testing. (Sun Photo / Mohamed Hayyan)

Health Protection Agency (HPA) on Monday stated that discussions are underway to determine an additional location to provide PCR testing for COVID-19.

Currently, free PCR-testing is only available from the Social Center in Male'. With HPA's new requirement of a negative PCR-test 72 hours before travelling, effective from Monday, January 10 onwards, many people have been queuing outside Social Center. Private clinics that provide testing also had an overwhelming amount of people come in.

HPA said that if 14 days have passed since the second shot for individuals who are fully vaccinated travelling out of Male’ area – they will be required to present a negative PCR test taken 72 hours prior. Those not fully vaccinated will have to undergo a mandatory 14-day quarantine – after which they must undertake a PCR test, and if tested positive, they must remain in quarantine until recovery.

Speaking to 'Sun', an official from HPA stated on Sunday, January 9 stated that the agency will open a new testing location if the demand becomes too much for Social Center to handle.

Following the long waiting lines outside of the testing centre Sunday night, 'Sun' reached out again to HPA. An official who spoke stated that discussions were underway to determine a new location. The official noted that if and when the new location is confirmed, free testing will be available from there.

Meanwhile, due to the high demand for testing HPA announced that they will be allowing travel to islands from Male’ area in the upcoming two days without the result of a PCR test.

Tata to be compensated with two plots, island