Shifaaz: Nothing done for Komandoo by an administration other than that of MDP 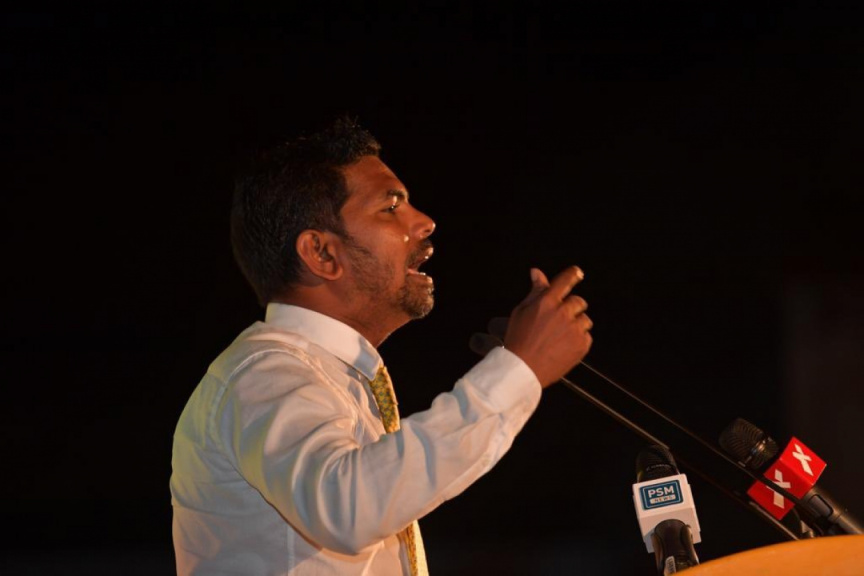 Maldivian Democratic Party’s (MDP) Deputy President Mohamed Shifaaz has stated that nothing has been done for Komandoo by an administration other than that of his party.

Speaking at a ceremony held last night at Komandoo to launch the campaign of MDP’s candidate, Mohamed Rashid, for the Komadoo parliamentary seat by-elections – Shifaaz said that from Shamsudheen’s administration till present, a mere stone has only been added to Komandoo during the chance MDP got to govern.

He also stressed that the close tie formed between MDP and Komandoo is one that could never be severed.

Minister at President’s Office, former Baarah MP Shifaaz said that children of Komandoo residents are studying their degrees free of charge today. On this note, he detailed that 48 students from Komandoo are studying under the administration’s free-degree program at present.

“Can boldly say that from Shamsudheen’s administration till present, a mere stone had only been added to Komandoo during the chance MDP got to govern. Saying this after challenging. There would have been nothing else done during any other administration,” he had said.

Noting that he had previously visited Komandoo ages ago, Shifaaz said that residents of Komandoo were not provided the most basic services by the government during that time.

Whilst Shifaaz has claimed that a mere stone had only been added to Komandoo during MDP’s governance – Komadoo which was only seven hectares in size was reclaimed to measure up to 17 hectares during former President Abdulla Yameen Abdul Gayyoom’s administration.

Komandoo’s seven-hectare land area was reclaimed and increased to 17 hectares within a timeframe of just one week.

The land reclamation project at Komandoo was completed on April 16, 2018, during former President Yameen’s administration.

Over MVR 11 million was included in 2018’s state budget for the reclamation and shore protection project at Komandoo.