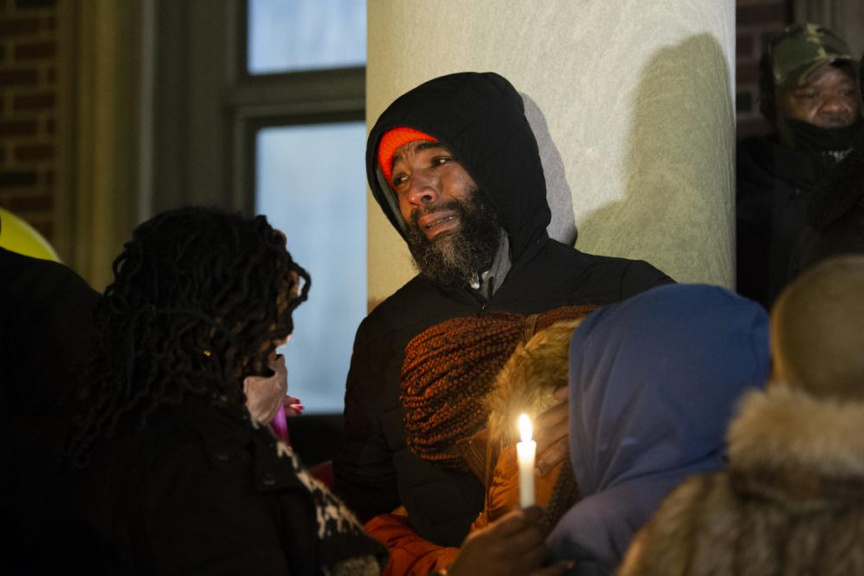 Family members gather by the Bache-Martin School for a vigil to honor the victims of a rowhouse fire, Thursday, Jan. 6, 2022, in Philadelphia. (Joe Lamberti/Camden Courier-Post via AP)

PHILADELPHIA (AP) — Investigators are looking into whether a 5-year-old who was playing with a lighter set a Christmas tree on fire, sparking a conflagration that killed 12 family members in a Philadelphia rowhome, officials revealed Thursday.

That disclosure was included in a search warrant application as city and federal investigators sought to determine the cause of the blaze, the city's deadliest in more than a century, which took the lives of three sisters and several of their children early Wednesday.

Jane Roh, the spokesperson for District Attorney Larry Krasner, confirmed the contents of the search warrant, which was first reported by The Philadelphia Inquirer.

Fire officials provided few details at an afternoon news briefing, declining to say how many people escaped the blaze or speculate on a possible cause, adding the fire scene was complex. Officials also did not say where the fire began, calling it part of the investigation.

“I know that we will hopefully be able to provide a specific origin and cause to this fire and to provide some answers to the loved ones and, really, to the city,” said Matthew Varisco, who leads the Philadelphia branch of the federal Bureau of Alcohol, Tobacco, Firearms and Explosives.

ATF specialists and other investigators took photos and combed through the charred, three-story brick duplex owned by the Philadelphia Housing Authority, the city’s public housing agency and the state’s biggest landlord.

In a statement at a Thursday night vigil, relatives said the matriarch of their family had lost three daughters and nine grandchildren in the blaze. The daughters were identified as Rosalee McDonald, Virginia Thomas and Quinsha White. There were two survivors, the family said. Temple University Hospital said one was in stable condition.

In 2021, there were 14 people living in the upstairs four-bedroom apartment, according to Kelvin Jeremiah, the housing authority’s president and CEO. Six family members had moved there a decade ago, and the family had grown substantially since then, adding eight children, he said.

PHA “does not evict people because they have children,” Jeremiah said, responding to reporters’ questions about whether the house was big enough for so many people.

“This was an intact family who chose to live together. We don’t kick out our family members ... who might not have other suitable housing options,” he said.

Jeremiah, who struggled to keep his composure at times, said officials had reached out to surviving family members from both apartments to help find them new homes.

The fire department previously said none of the four smoke alarms in the building appeared to have been working. But housing authority officials said Thursday the building actually had 13 tamper-resistant, 10-year detectors, all of which were operational during the last inspection in May 2021.

He declined to comment on the possibility that the flames had spread from a Christmas tree.

Fires involving Christmas trees are much more likely to be fatal than other types of house fires, according to the National Fire Protection Association, a nonprofit safety group. Christmas trees are the cause of about 160 fires per year, causing two deaths annually and $10 million in property damage, the group said.

A live tree that has dried out can be fully engulfed within 15 or 20 seconds.

“These can get very, very big very, very fast if these trees are drying out,” said Isaac Leventon, a fire research scientist at the National Institute of Standards and Technology. “At the end of the day, a dry tree can represent upwards of 10 or 20 pounds of wood.”

Officials did not release the names or ages of those killed in the blaze, which started around 6:30 a.m. Wednesday.

Marcia Fudge, secretary of the U.S. Department of Housing and Urban Development, expressed condolences on Twitter and said HUD had been in touch with city leaders and “stands ready to support the community in any way possible.” HUD investigators were in the city on Thursday, according to Marrigan.

Wednesday’s blaze was the deadliest fire at a U.S. residential apartment building since 2017, when 13 people died in an apartment in the Bronx neighbourhood of New York City, according to data from the National Fire Protection Association. That fire started after a 3-year-old boy was playing with stove burners.

Prior to that, the deadliest fire in an apartment building was in 1982 in Tennessee. Sixteen people died in that blaze, NEPA data showed.