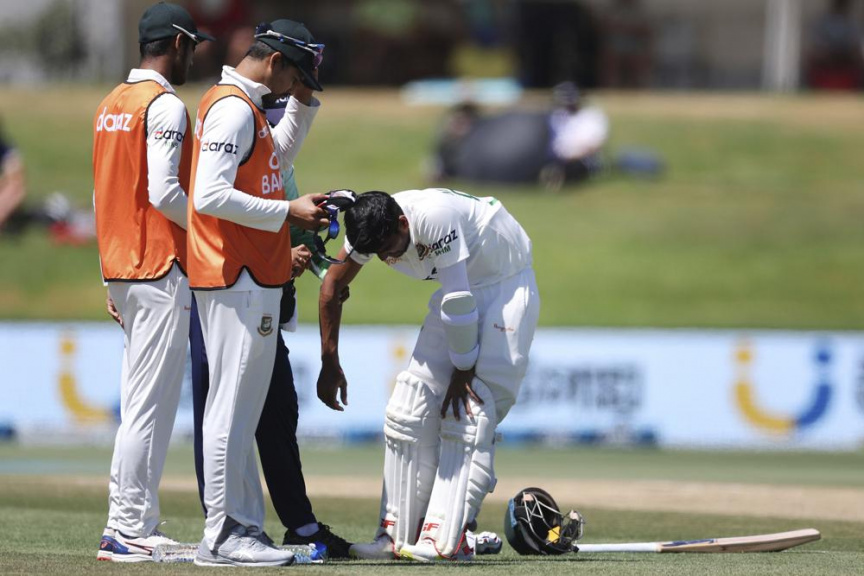 MOUNT MAUNGANUI, New Zealand (AP) — Bangladesh was bowled out for 458 on the fourth morning of the first cricket test Tuesday, giving it a 130-run first innings lead over New Zealand.

The end was delayed by a 75-run partnership for the seventh wicket between Mehidy Hasan Miraz and Yasir Ali, then hurried by the arrival of the third new ball which swung.

New Zealand faced three overs before lunch and was 10 without loss at the interval, with Tom Latham 10 not out and Will Young yet to score.

Mehidy carried his overnight score of 20 on to 47 before he was the first wicket to fall Tuesday. He had twice earlier been given out lbw but successfully reviewed those decisions on both occasions.

In the first case he stretched forward to a ball from spinner Rachin Ravindra and stooped to sweep around his front pad. Ravindra’s appeal was upheld by the umpire but replays showed the ball had glanced Mehidy’s glove before striking the pad.

Soon afterwards he again was given out lbw, this time to Neil Wagner, but replays showed the ball came off a slight inside edge.

Mehidy’s luck finally ran out in the 16th over of the morning when he was caught by wicketkeeper Tom Blundell from the bowling of Tim Southee. He flashed at a ball that was short and well wide of off stump, clearly edging behind.

Yasir was caught behind three overs later, giving Kyle Jamieson his first wicket of the innings.

Taskin Ahmed fell lbw to Southee and Shoriful Islam was bowled by Trent Boult to end the innings.

New Zealand may be concerned that the third new ball swung more than the previous new balls have done, which might help the Bangladesh bowlers.