Bangladesh bowls out New Zealand for 328 on day 2, 1st test 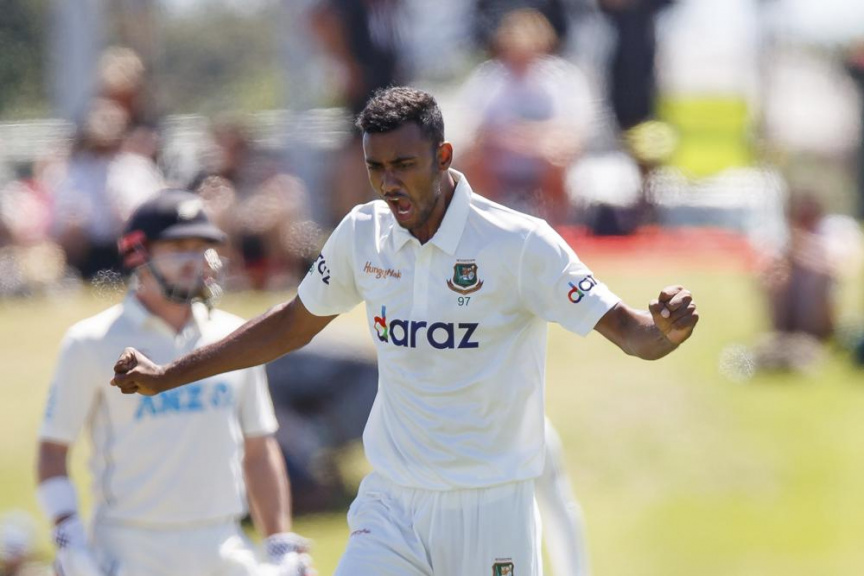 Shoriful Islam of Bangladesh takes the wicket of Rachin Ravindra of New Zealand during play on day two of the first cricket test between Bangladesh and New Zealand at Bay Oval in Mount Maunganui, New Zealand, Sunday, Jan. 2, 2022. (Aaron Gillions/Photosport via AP)

Bangladesh claimed New Zealand’s last five wickets for 70 runs after it resumed its first innings at 258-5. Nicholls, who began the day on 32, was the last man out at 328 after posting his 12th test half century.

Bangladesh reached five without loss in three overs before lunch.

New Zealand had slightly the better of the first day after being sent into bat, helped by Devon Conway’s 122 and Will Young’s 52.

The loss of Tom Blundell in the last over before stumps on day one left Nicholls to build on a relatively solid foundation.

He reached his half-century from 97 balls and he kept the total skipping with 12 boundaries. But he had little support from the New Zealand tail.

Allrounder Rachin Ravindra was out for four, exposing the bowlers, and Kyle Jamieson followed for six, Tim Southee for six and Neil Wagner for a first-ball duck. Trent Boult was left nine not out after hitting two boundaries from five balls.

Though Bangladesh was encouraged to bowl first by the green pitch at Bay Oval, it relied on spinners to bowl 38 of 108 overs to the Kiwis. The spinners wrapped up the tail after seamer Shoriful Islam dismissed Ravindra for the first wicket of the day. Shoriful finished with 3-69 from 26 overs but deserved more.

Jamieson, Southee and Wagner fell to the off-spin of Mehidy Hasan Miraz, who went wicketless on day one but finished with 3-86 from 32 overs.

Bangladesh captain Mominul Haque claimed the vital wicket of Conway on Saturday and also dismissed Nicholls to end the innings, finishing with 2-6 from 4.1 overs with his left-arm spin.

The Bay Oval pitch has dried in hot conditions over the first four sessions. New Zealand will be relying on the harder surface under a mat of grass providing good bounce for its four seamers, having chosen Ravindra as its only spinner.