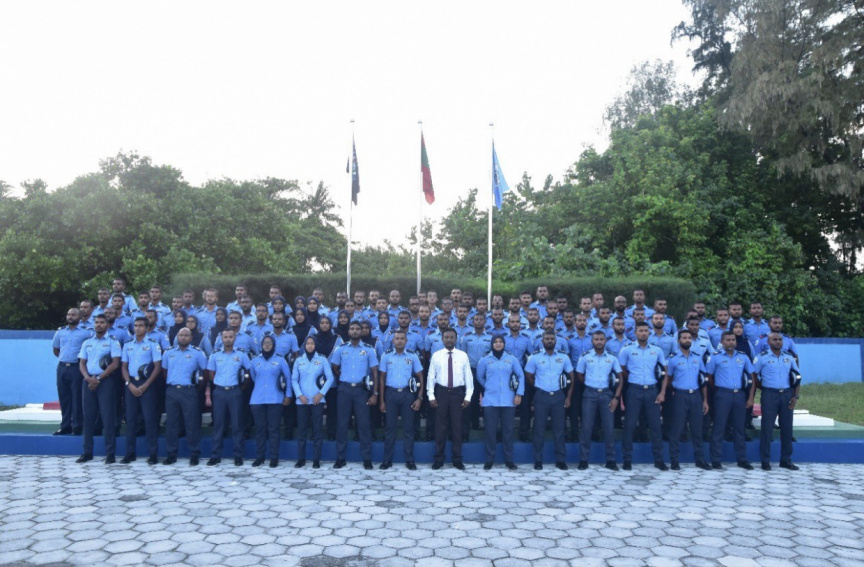 President of Dhivehi Bahuge Academy Dr Ashraf Abdul Raheem (C) with the participants of Police Initial Training of the 33rd batch during a gathering held in Dh.Vanee to mark the National Unity Day on December 26.

The ceremony was attended by 80 participants of the ongoing Police Initial Training of the 33rd batch and their instructors.

Upon the invitation extended by Police to speak at the ceremony, Dr Ashraf highlighted language, culture, religion and independence as being the bedrocks needed to maintain unity within the nation.

He urged participants to maintain the four aspects as they were the pillars upholding the unity of the nation.

Additionally, he stated that if any of those factors are impacted, the nation will no longer be the same, nor will it retain any of the good qualities, even if there is a flag and government left.

Speaking further into the topic, Dr Ashraf said that one of the biggest blessings bestowed upon Maldivians was their own language.

Hence, in order to keep patriotism alive, people need to understand the emotions and sentiments expressed by the language, he said.

He said that multiple languages and religions within a country were factors that could create division and weaken the people.

“When we lose our faith and different religions are introduced, the country will spiral into an internal conflict. Then there are the good values such as being respectful towards elders, being gentle towards children, providing a helping hand within the community and partaking in events like launching vessels into the water, community cooking and island cleanups. The country will remain united only when we work towards retaining these values,” said Dr Ashraf.

Speaking to ‘Sun’, a Discipline Supervisor at the Police Training School Inspector Ahmed Latheef said that the lecture was one of the most comprehensive and informative ones given at the centre to date, adding that participants were very satisfied and listened with eagerness.

“This was a very important lecture. It was entirely based on the role of policing and patriotism. Very important information was given. Participants were very satisfied. I will say that this was one of the most comprehensive and informative lectures given in the training schools history,” said Inspector Ahmed Latheef.