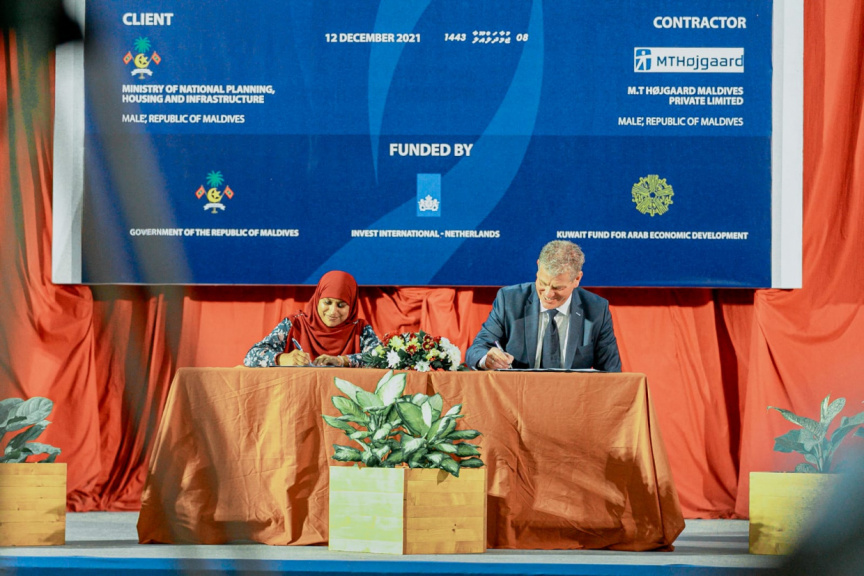 The Maldivian government has inaugurated a MVR 300 million project to protect the coast of the southern city of Fuvahmulah.

The project was awarded to MT Hojgaard Maldives Pvt. Ltd. in a ceremony at the Hafiz Ahmed School in Fuvahmulah on Sunday evening. It’s the same company which was awarded the Fuvahmulah harbor development project.

The project was inaugurated by Planning Minister Aslam and Dutch Ambassador Gonggrijp.

The encompasses the construction of 2,650 meters of coastline protection walls from the north of Fuvahmulah harbor to the east of the island.

MT Hojgaard Maldives is required to complete the project within 606 days.

“I am fully confident the project will go ahead at full speed, and will be completed in 600 days as scheduled. This is the largest coastal protection project in Maldives,” said Aslam.

VP Faisal who himself is a native of Fuvahmulah, said it was the most long-awaited dream of the island’s residents.

He said that the government was already conducting multiple development projects in the island.

“Today we are realizing a long-awaited dream,” he said.

The project is financed with a grant from the Netherland’s government, a loan from Kuwait fund, and from the Maldivian government’s budget.

Fuvahmulah, which boasts the most diverse coral ecosystems in the country with its healthy habitats and unique coral sand beach formations, was declared a United Nations Educational, Scientific and Cultural Organization (UNESCO) Biosphere Reserve last year.