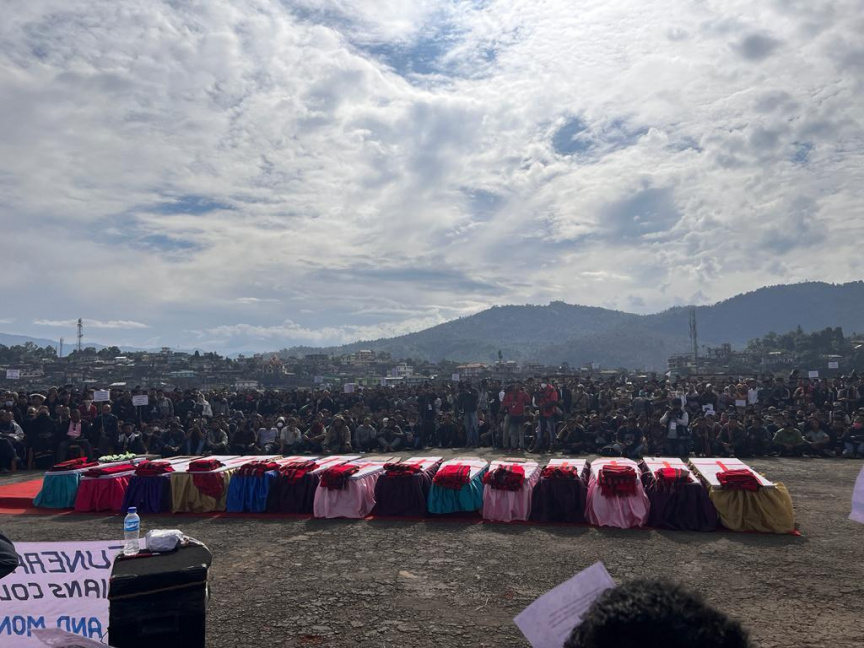 The coffins of people killed by Indian army soldiers on Saturday, who mistakenly believed some of them were militants, and one who was killed when soldiers fired at a crowd of protestors on Sunday, are laid out in a row during a public funeral in Mon, in the northeastern Indian state of Nagaland, Monday, Dec. 6, 2021. (AP Photo/Fifi Konyak)

NEW DELHI (AP) — A top elected official in India’s northeast region called on Monday for the withdrawal of emergency powers granted to Indian troops, a day after soldiers killed over a dozen civilians, sparking violent protests in the troubled state.

“AFSPA is damaging the image of our country which is the world’s largest democracy,” Rio said at the funeral services for the dead civilians, in the district of Mon, the site of the incidents.

Fourteen civilians and a soldier were killed in a series of violent incidents over the weekend in Nagaland state, officials said Sunday. At least 28 civilians were also wounded in the clashes and some of them were in critical condition, police said.

The killings prompted calls from local residents and politicians for the revocation of the act that gives the military in some parts of India’s northeast sweeping powers to search, seize and even shoot suspects on sight without fear of prosecution.

People in Nagaland for years have accused security forces of exceeding the powers granted to them under the 1958 AFSPA in their counterinsurgency operations. Human rights groups have called the act draconian and pleaded for its repeal for decades.

The Indian military said soldiers fired at a pickup truck on Saturday after a tip about a movement of insurgents in the state’s remote Mon district along the border with Myanmar. Six civilians were killed, prompting violent protests by angry villagers who torched three army vehicles. The soldiers responded by firing at them, killing seven more people, officials said. One soldier was also killed in the clash with protesters.

Locals said the victims were miners returning home to their village when soldiers ambushed the truck carrying them.

The violence escalated on Sunday when protesters attacked an army camp and set some residential quarters on fire. Army soldiers used live ammunition at the crowd, killing one more person.

Police have ordered an investigation amid rising tensions in the state. The Indian army in a statement released Sunday said the operation was based on “credible intelligence” but expressed “regret” and called it a case of “mistaken identity.”

“If the operation was based on the so-called credible intelligence then how could it be a case of mistaken identity,” said Phangnon Konyak, a local tribal leader. “It was a cold-blooded murder.”

Speaking to hundreds of people gathered at the funeral services Monday, Chief Minister Rio said Nagas will never forget the slain civilians as their coffins were lined up on the ground. Mourners put wreaths on the coffins during the funeral services and displayed protest placards.

“Killing of innocent civilians is terrorism,” one placard read.

Rio also offered financial assistance to the families of the victims.

Rebels, as well as local leaders and other groups, have campaigned for decades for demands ranging from independent homelands to maximum autonomy within the Indian Constitution.

In recent years, the violence has ebbed but the demands for political rights have amplified even as the federal government has pushed for talks with separatists.

India hosts Putin as it balances ties with Russia, US