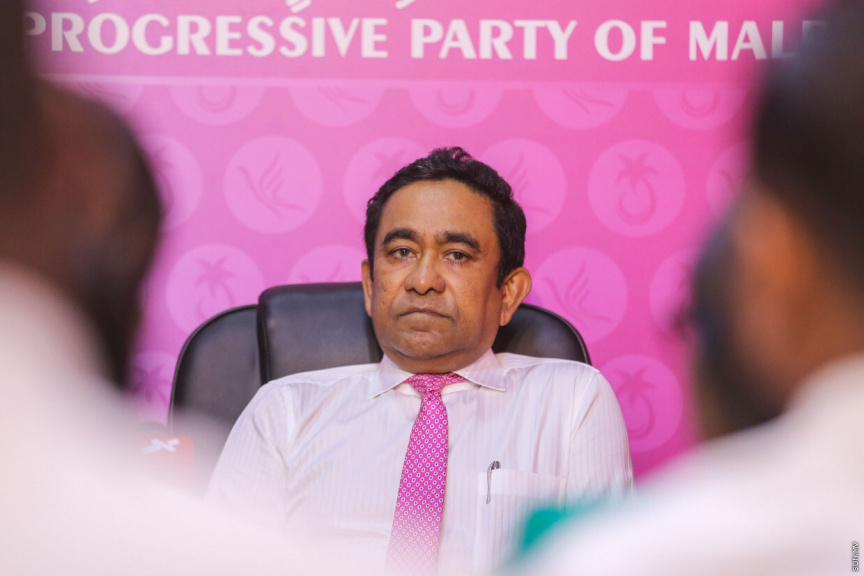 State prosecutors told the Criminal Court on Monday that the police had collected evidence former Maldivian President Abdulla Yameen Abdul Gayoom – who recently regained his freedom after the Supreme Court quashed a money laundering conviction against him – was planning on fleeing Maldives.

Prosecutors made the argument at a Criminal Court hearing held on Monday morning, to decide on a motion for a travel ban order requested by the prosecution in connection to the case against Yameen over the lease of R. Fuggiri for resort development.

The former president was charged money laundering and bribery in connection to the case last year.

Both the prosecution and the defense presented their arguments regarding the motion at the hearing – which began at 09:00 am.

The public prosecutor said they submitted the motion for a travel ban order based on sufficient cause, including evidence a crime was committed.

“There is evidence he is attempting to leave Maldives,” said the prosecutor.

The prosecutor noted that Yameen had served as president, and said he had both the resources and financial means live overseas in hiding.

“There are challenges in extraditing people accused of such crimes once they are released and flee from Maldives,” said the prosecutor.

The prosecution asked for Yameen’s passport to be held pending the outcome of his trial.

Yameen’s lawyers requested two weeks to prepare a response to the prosecution’s arguments.

The prosecutor objected to the request, stating that it wasn’t a new issue, and that the time asked by the defense was far too long. He also said that the defense had already been aware the court would be making its decision regarding the travel ban.

It was Yameen himself who responded.

Noting that the prosecution claimed to have evidence he was attempting to flee the country, he asked for time to review the evidence with his lawyers.

“I believe I have done nothing to flee,” he said.

Yameen said that the defense wasn’t privy to the evidence in question, and wished to know what the evidence was.

Yameenis accused of taking a USD 1.2 million bribe for the lease of Fuggiri, and laundering the money through Krik Riza (Kurikeela Riza), Ma. Kurikeela, Male’ City.

Following the presentation of arguments by both sides, Judge Ahmed Shakeel said a hearing would be held at 04:00 pm to make a decision, after Krik Riza’s hearing – which is scheduled for 01:00 pm.