Ambassador: Communist Party of China ready to work with political parties in various countries, including Maldives 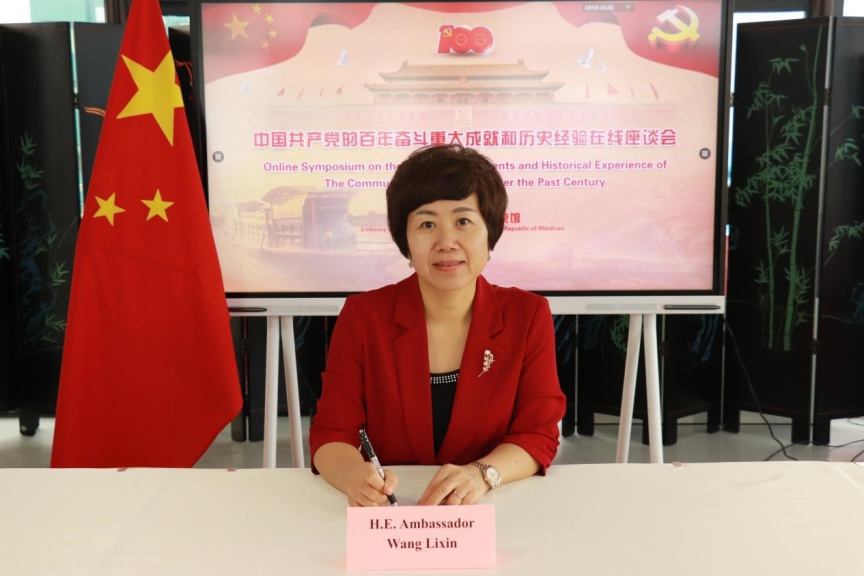 Chinese Ambassador Wang Lixin at the online symposium held by the Chinese Embassy in Maldives to commemorate the Communist Party of China's 100th anniversary on November 23, 2021. (Photo/Chinese Embassy)

Chinese Ambassador to Maldives, Wang Lixin states that the Communist Party of China is ready to work together with political parties in various countries, including Maldives.

She made the remark in an online symposium held by the Chinese Embassy in Male’ on November 23 to commemorate the achievements and historical experiences of the Chinese ruling party – which marked its 100th anniversary earlier this year.

In her speech, Wang said that over the past century, the Communist Party of China, while pursuing prosperity for the Chinese people, also contributed to human progress and world harmony, and had a global vision for the future of humanity.

“It has been and will continue to be a builder of world peace, contributor to global development, and defender of the international order,” she said.

Wang said that the Communist Party of China was ready to work together with political parties in various countries, including Maldives, in order to exchange experiences in governance and build a community of shared future for humanity.

“The CPC is ready to work together with political parties in various countries including Maldives to exchange governance experiences, pursue happiness for the people and build a community of shared future for mankind,” she said.

Wang, in her speech, spoke of the founding of the Communist Party of China and its transformation over the last century.

According to the Chinese Embassy, the online symposium was attended by representatives from the Maldivian government, Parliament, NGOs, and the media.

IUM kicks off first hybrid book fair in the Maldives