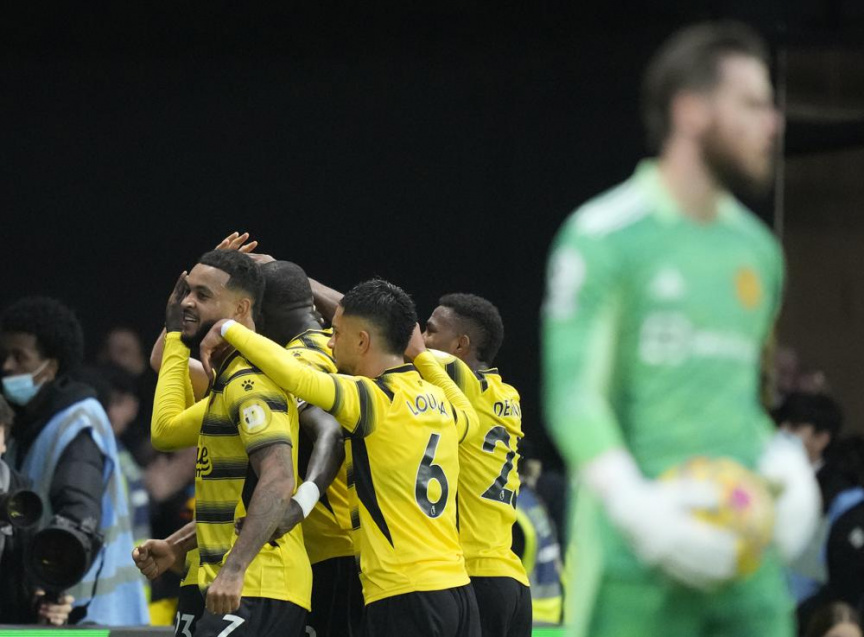 LONDON (AP) — After overseeing yet another humiliating loss as Manchester United manager, Ole Gunnar Solskjaer walked over to the angry away fans and held both hands up in apology, before giving them a quick wave.

He may well have been waving goodbye.

Even Solskjaer sounded unsure whether he’ll be given another chance to turn things around after a 4-1 loss at Watford in the Premier League underlined just how badly United is struggling at the moment.

“I work as hard as I can, as well as I can,” Solskjaer said when asked about his future. “But at the moment we’re not getting the results so I understand your question. But as I said, I’m not going to discuss that with you here and now.”

Saturday’s result was bad enough but the performance was so lackluster — even before two late goals padded the scoreline for Watford — that it left Solskjaer’s future in in serious doubt, with United dropping to seventh place in the standings.

“It was an embarrassing first half,” United goalkeeper David De Gea said. “It was hard to watch the team playing like today. I think it’s a nightmare.”

Solskjaer has been able to ride out previous stretches of underperformance, in part because of his popularity with fans as a former striker who took on legendary status because of his ability to come off the bench to score crucial winners. But even the United fans seemed to turn against him when he came over to applaud them after the game.

“We’re embarrassed by losing the way we do,” Solskjaer said about his gesture of apology toward the fans. “Sometimes you’ve got to say sorry. And that was a ‘sorry for the performance.’”

Unlike United, Chelsea showed again that it’s a genuine title contender this season by consolidating its lead atop the standings with a 3-0 win at Leicester.

Former Liverpool captain Steven Gerrard started his reign as Aston Villa manager with a 2-0 win over Brighton, while his predecessor Dean Smith saw his new team Norwich climb out of last place with a 2-1 home win against Southampton.

For United, it was a fifth loss in its last seven Premier League games — the previous two coming to biggest rivals Liverpool and Manchester City.

This one could have been even worse, but Ismaila Sarr missed two chances to convert an early penalty — both of them saved by De Gea — after the first was retaken because of encroachment.

Joshua King still put Watford ahead in the 28th and Sarr made amends by netting the second just before the halftime break for Claudio Ranieri’s team.

Solskjaer responded by making two halftime substitutions — including bringing on the little-used Donny Van De Beek, who has struggled to get chances under the Norwegian since signing for United last year. The Dutch midfielder responded by pulling a goal back in the 50th after being set up by Cristiano Ronaldo.

United captain Harry Maguire was then sent off for a second yellow card after a clumsy challenge in the 69th, with Ronaldo having an equalizer ruled out for offside shortly afterward. Watford then added two goals in injury time to complete the rout.

Chelsea midfielder N’Golo Kante marked his latest return to former club Leicester with a brilliant individual goal as Chelsea swept aside a team it battled against last season just to secure a top-four finish.

Antonio Rudiger had given Chelsea the lead in the 14th minute, while U.S. international Christian Pulisic netted his second of the season after coming on as a second-half substitute. The American forward was picked out in the middle of the penalty area by a pass from fellow substitute Hakim Ziyech and took a touch before producing a finish on the slide through Kasper Schmeichel’s legs.

Liverpool handed Arsenal a harsh reality check by tearing through the Gunners in the second half.

A resurgent Arsenal side had the chance to climb above Liverpool in the standings with a win, but Juergen Klopp’s side gave the visitors a reminder that there is still a big gulf in class between the teams.

Sadio Mane scored the opener in the first half and Liverpool then dismantled Mikel Arteta’s side after the break, with Diogo Jota, Mohamed Salah and substitute Takumi Minamino running up the scoreline.

Gerrard became the first Villa manager to win his first Premier League game in charge since John Gregory in February 1998 after Ollie Watkins and Tyrone Mings scored late goals to secure the win against Brighton.

Gerrard left Rangers during the international break to replace Smith, who was fired following five successive Premier League defeats. Smith was quickly snapped up by Norwich, and also got off to a winning start thanks to Grant Hanley’s 79th-minute header against Southampton.

The result made it back-to-back victories for the Canaries, who moved off the bottom of the table by leapfrogging Newcastle.

New Newcastle manager Eddie Howe, who tested positive for the coronavirus on Friday, had to watch from home as his team twice came from behind to draw 3-3 with newcomer Brentford.

Burnley and Crystal Palace also drew 3-3 in a game where all six goals came in the first 49 minutes, while Wolverhampton ended West Ham’s four-game winning streak with a 1-0 home victory.