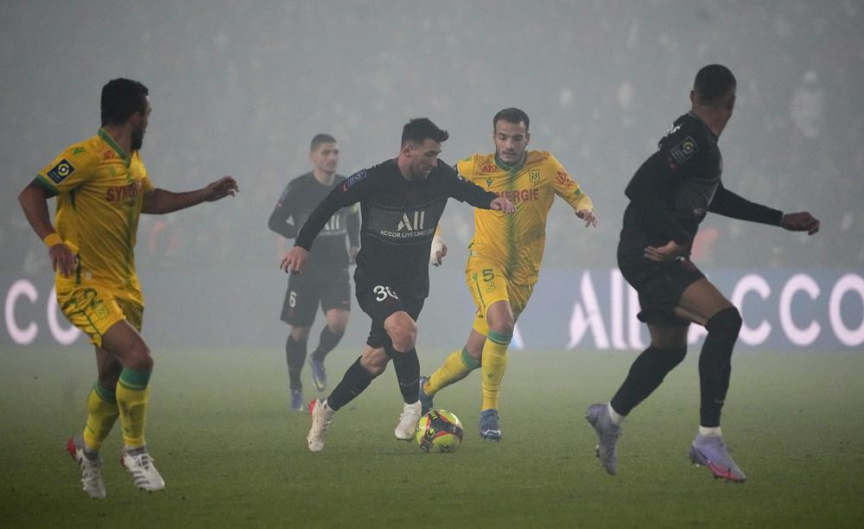 PARIS (AP) — Lionel Messi scored his first goal in the French league and Kylian Mbappe grabbed the fastest goal of his career as Paris Saint-Germain beat Nantes 3-1 on Saturday.

Messi sealed PSG’s win in the 87th minute from Mbappe’s pass at the end of a counterattack. After receiving the ball, the Argentina star quickly advanced near the edge of the box, dribbled past a defender and curled one of his signature left-footed shots past Nantes goalkeeper Alban Lafont.

Messi, who joined from Barcelona this summer, had already scored three Champions League goals for his new team but had failed to find the net in five previous Ligue 1 appearances.

Playing in front of a buoyant crowd at Parc des Princes, the nine-time champions maintained their unbeaten record at home this season. PSG has a 12-point lead over Rennes, which moved to second place with a 2-0 win over Montpellier.

Ahead of a trip to Manchester City in the Champions League on Wednesday, PSG coach Mauricio Pochettino started with the trio of attacking stars, Mbappe, Messi and Neymar.

PSG got the perfect start as the home side needed less than two minutes to take the lead, with Mbappe scoring his seventh goal of the season.

The home side made the most of a poor clearance from Nantes defenders as Leandro Paredes unleashed a 25-meter half-volley that Mbappe deflected past Lafont. According to Opta, it was PSG’s fastest league goal since May 2017, and Mbappe’s fastest goal in his professional career.

The Nantes goalkeeper was decisive a few minutes later to block a low shot from Mbappe, then stopped a fine effort from Neymar near the half-hour mark. Another superb save from the 22-year-old ’keeper frustrated Messi in the 38th after he played a one-two with Marco Verratti and breached the Nantes defense only to see his left-footed shot parried away.

The match was more balanced after the interval as Nantes played more aggressively. PSG was reduced to 10 men in the 65th after goalkeeper Keylor Navas received a red card for a clumsy foul outside the penalty box on Ludovic Blas, who was running alone toward the goal.

Nantes pushed hard for an equalizer and was finally rewarded for its efforts when Randal Kolo Muani beat the offside trap to level the scoring in the 76th. The forward first saw his header denied by Navas’ replacement Sergio Rico, but followed up his effort with a clever backheel touch that crossed the goalline.

Nantes was unlucky when Dennis Appiah lobbed his own goal as he tried to intercept a low pass from Messi, instead deflecting the ball into the back of the net, before Messi opened his French league account.