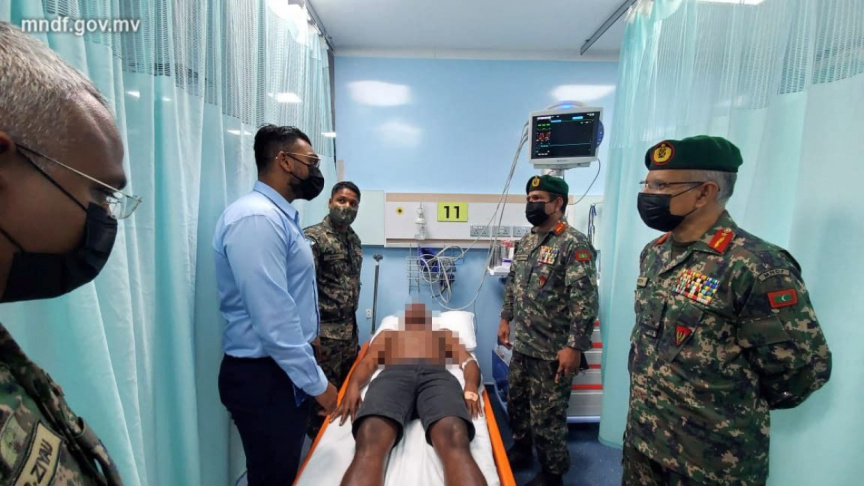 Staff Sergeant Hassan Fahmy is treated at the Indhira Gandhi Memorial Hospital (IGMH) after he was abducted and beaten in Male' City on November 18, 2021. (Photo/MNDF)

The MNDF Coast Guard officer who was abducted from a street in Male’ City and beaten on early Thursday has been discharged from the hospital after treatment.

MNDF disclosed the information in a statement on Thursday evening in which it condemned the ‘cowardly’ attack.

Staff Sergeant Hassan Fahmy, 38, was abducted from a street in Male’ City just after midnight. According to his family, he was attacked by a group of at least four masked men, who asked him for money. He lost consciousness after he was hit in the head with an object, and was carried to a nearby room, where he was beaten. The assailants dumped him in front of Indhira Gandhi Memorial Hospital (IGMH) in the morning.

MNDF, in its statement, said the agency’s leadership was closely monitoring condition. MNDF said that both President Ibrahim Mohamed Solih and Defense Minister Mariya Ahmed Didi have called to check his condition, and that Mariya provided assurance the government will provide all possible assistance to him.

MNDF said that the police were searching for the assailants, and that criminals should not be allowed to create fear within the community.

“And we take this opportunity to state that such cowardly attacks against soldiers will not interrupt the national service provided by soldiers,” reads the statement.