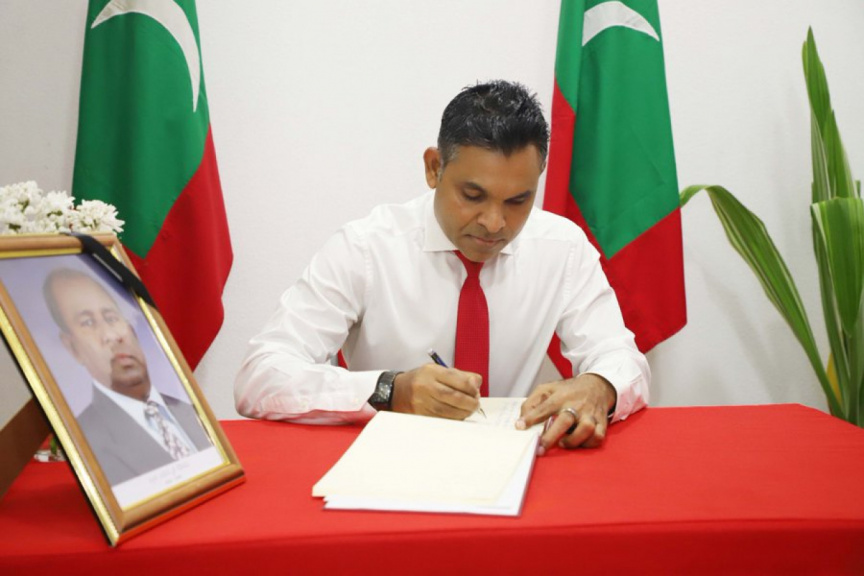 Vice President Faisal Naseem has signed the book of condolences opened in memory of Mohamed Rasheed (Copy Mohamed Rasheed), who died due to a stroke while admitted at ADK Hospital, at the age of 72 years, last Thursday.

Vice President Faisal signed the book of condolences in a visit to the Dhivehi Bahuge Academy today. After signing, he met with the staff at the academy.

Rasheed began his service to the field of Dhivehi language and literature at the age of 18 years. He received the National Award of Honor for his contributions to the field in 2020.

It had followed the National Award of Recognition for his contributions to the field of Dhivehi poetry in 2005, and the Lifetime Achievement Award for his services to the field of journalism by the Maldives Media Council in 2018.

Rasheed, in addition to being an acclaimed writer and poet, had also been an educator. He worked as a Dhivehi language teacher in multiple schools in the capital.

He has also been renowned for his calligraphy skills. He received the National Award for Public Service in the field of Dhivehi and Arabic calligraphy in 1988.

Prior to this, President Ibrahim Mohamed Solih had also signed the book of condolences. The signing, which began last Sunday will be open for public till the end of this month, on all working days from 09:00-14:30 at the academy.