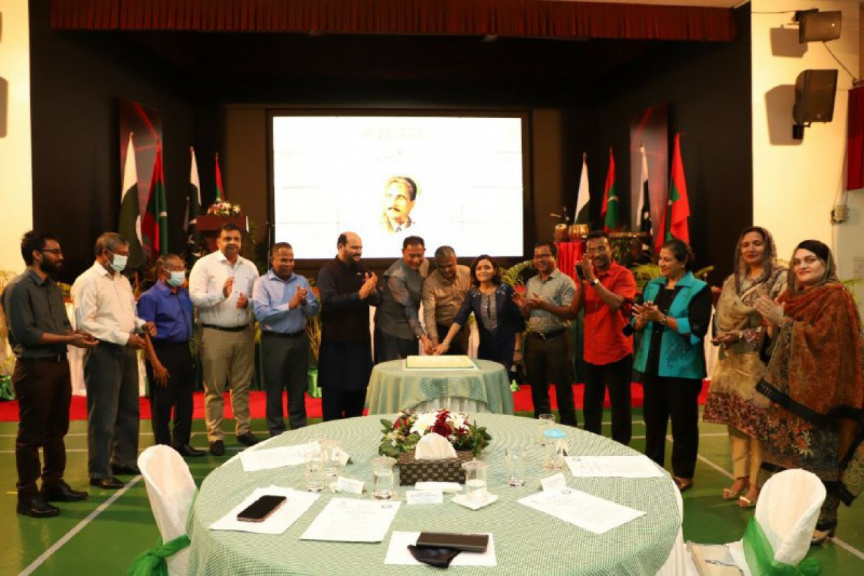 The Pakistan High Commission, in collaboration with the Dhivehi Language Academy, have commemorated Iqbal Day in Maldives, a day celebrated as tribute to Pakistani poet and philosopher Allama Muhammad Iqbal – known as the "Poet of the East".

Iqbal Day was commemorated in an event held at Iskanshar School on Tuesday.

At the event, the Pakistan High Commission screened a  video documentary on Iqbal, while Iskandhar School students presented Iqbal’s most well-loved poems.

Speaking at the event, Deputy Head of Mission at the Pakistan High Commission, Zulqurnain Ahmad highlighted on Iqbal’s two powerful inspirations to artistic expressions: Iqbal’s faith in the capacity for limitless development and man's unique position in the universe.

He also shared Iqbal’s message of ‘Khudi’ - 'Self'.

Ahmad invited all to cherish Iqbal’s memory, and to draw strength and comfort from him, while hoping that the interdependent destinies of peoples and nations, travel together harmoniously towards horizons with love and with happiness, with justice and with peace.

He also expressed gratitude towards the Dhivehi Language Academy for their collaboration in commemoration of Iqbal Day.

He highlighted Iqbal’s message for Muslims across the world, and stressed on the need for unity to meet new challenges of the world.

Dr. Ashraf underscored“Iqbal Shaheen” and explained Shaheen’s characteristics with Iqbal’s perspective. He urged the youth to follow the teachings of Iqbal to achieve the right place in the world.

He also presented poetry of Iqbal and translated it to Dhivehi.

Higher Education Minister Dr. Ibrahim Hassan, in his speech, said that Iqbal’s message is for all.

He said that Iqbal was a philosopher, a lawyer, a politician, a professor, a writer and a renowned poet all in one lifetime.

He noted that Iqbal is known the Thinker of Pakistan, The Poet of the East and the Sage of the Umma.

“I am humbled that he was rightly known as Allama, meaning Scholar, which has fused his name to compart of his identity, what a great achievement he did,” he said.

Dr. Ibrahim Hassan said that Iqbal will continue to be remembered for many valuable contributions.

He said that people need to not just understand the thinking of Iqbal, but also to adopt it to ensure unity in the Muslim Ummah for guidance on new ways in dealing with the new challenges of the world.