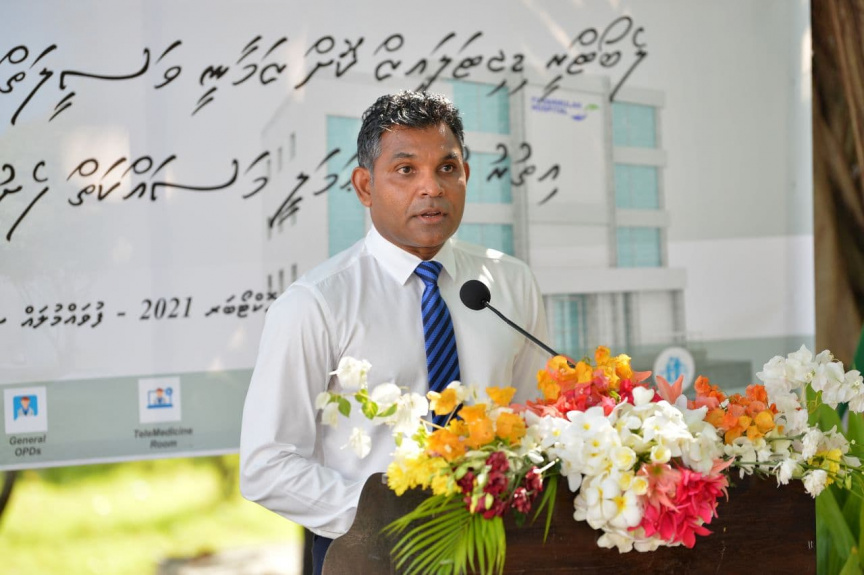 Vice President Faisal Naseem inaugurates the development project to digitize the laboratory at the Fuvahmulah Hospital on October 26, 2021. (Photo/President's Office)

Vice President Faisal Naseem states that strengthening the healthcare system is the country, especially in islands outside the greater Male’ region, is one of the government’s top priorities.

Faisal – who is in Fuvahmulah City on an official trip to the two southern Maldivian cities - made the statement while speaking at the ceremony held to inaugurate the development project to digitize the laboratory at the Fuvahmulah Hospital and expand the premises' facilities for modern healthcare capabilities on Tuesday.

Speaking at the ceremony, Faisal highlighted various ongoing efforts by the government to secure and improve decentralised healthcare services across the country.

He said that providing quality healthcare in all atolls and islands remains a top priority of the Maldivian government.

He also said that resources provided for the health sector, especially in the tertiary hospitals, have been significantly increased throughout the Maldives during the current administration.

Faisal said that the new extension building would address the issues of laboratory space shortage at Fuvahmulah Hospital, and expand the hospital’s services, such as specialist OPD and speech therapy services for children with disabilities.