President Solih invited to attend Our Ocean Conference in Palau 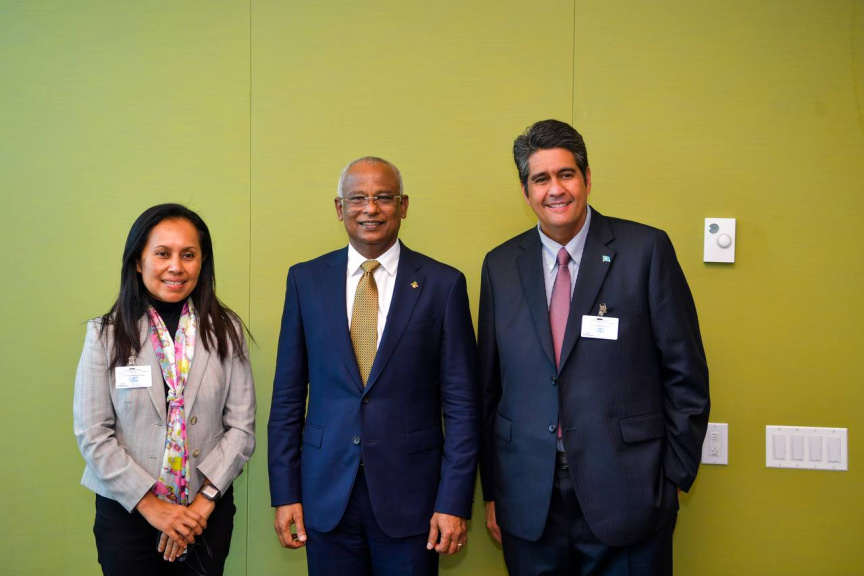 Palauan President Surangel S. Whipps Jr. has invited Maldivian President Ibrahim Mohamed Solih to attend the 7th Our Oceans Conference scheduled to be held in Palau in February next year.

The invitation to attend the conference was extended to the Maldivian leader in a meeting with his Palauan counterpart on the sidelines of the 76th session of the United Nations General Assembly in the UN headquarters in New York, United States, on Thursday.

Discussions during the meeting centered on the ongoing COVID-19 pandemic, environment and climate change, and tourism.

President Solih inquired about the COVID-19 situation in Palau, and praised the Palauan government's prompt response to the pandemic.

He also discussed the challenges Maldives has experienced as a result of having to close its borders, as well as the country’s determination to vaccinate the entire population as soon as possible.

President Whipps, meanwhile, said that COVID-19 is well under control in Palau due to its decision to close its borders and that no one has been hospitalized or died of the virus in the country.

He also said that Palau has much to learn from Maldives on reopening the borders and restarting the tourism sector.

Both spoke extensively about the climate crisis, which they both struggle with as Small Island Developing States (SIDS). Noting the common membership of the Alliance of Small Island States (AOSIS), President Solih and President Whipps expressed confidence in each other to work together in the international arena to ensure that mitigation policies are effective and gain momentum.

They also spoke about the importance of ensuring sustainable ocean governance and a blue economy.

President Solih praised President Whipps for his leadership in advocating for the 1.5 ° C global warming limit, as well as for being one of the first countries to ratify the Paris Agreement. T

They committed to working together even more closely in the fight against climate change at the upcoming COP26 in Glasgow, Scotland.

The meeting concluded with the two leaders expressing hope for enhanced bilateral ties on issues of common concern in the future.