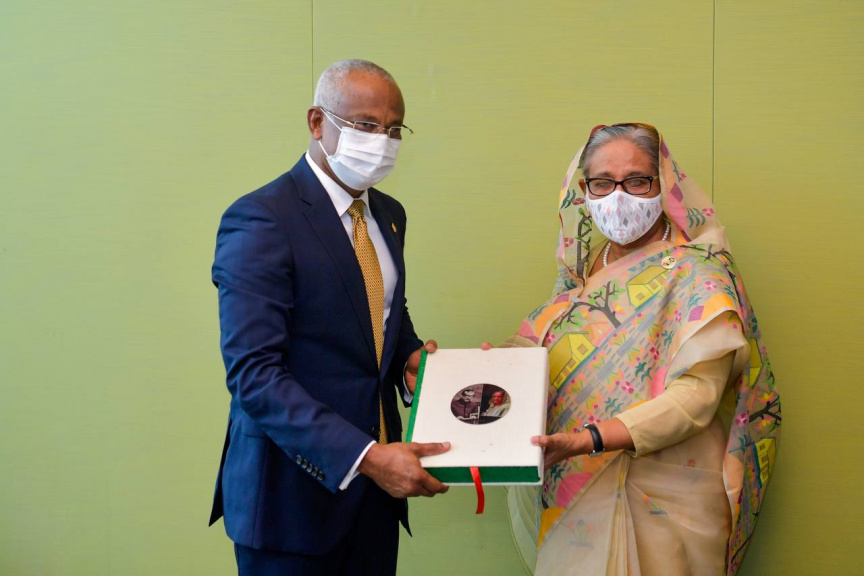 In this meeting – the leaders held discussed exploring new avenues of connectivity as well as trade, commerce and economic diplomacy between the two countries. The launch of direct air cargo carriers between Bangladesh and the Maldives was mentioned up in line with this.

They also reaffirmed the commitment to continue the close cooperation maintained between both the countries in the health and education sectors.

Both leaders also discussed the current COVID-19 situation in their respective countries – as well as the unprecedented challenges faced during the pandemic. President Solih briefed Prime Minister Sheikh Hasina on the measures taken by the Government to combat the pandemic – emphasizing the importance given to ensuring quality medical care and vaccines for all, including the expatriate community in the Maldives, to include Bangladeshis. He also thanked the Bangladesh Government for the relief assistance in deploying the Bangladesh medical teams to assist with the vaccination program.

Prime Minister Sheikh Hasina noted that the COVID-19 situation in Bangladesh had improved a lot – with the number of deaths being significantly reduced. She extended gratitude to the Maldivian Government for their efforts to regularize undocumented migrant workers from Bangladesh – an initiative that was ramped up during the pandemic.

The both of them also discussed climate change – with President Solih raising concern over the impacts of the climate emergency the two countries witness as two of the most vulnerable countries to climate change. He also commended the work being done by Bangladesh as the current Chair of the Climate Vulnerable Forum. They both expressed their hope to collaborate for a fruitful outcome during the upcoming COP26. Prime Minister Sheikh Haseena also stressed the urgency of sea level rising to both Bangladesh and the Maldives – noting that she is particular about raising the Maldives’ plight in her meetings with other leaders.

President Solih also assured that Maldives will continue to support Bangladesh regarding Rohingya Muslims – and expressed interest to work alongside the Bangladesh Government and the Organisation of Islamic Cooperation in order to seek accountability for the people of Rohingya at the International Court of Justice.

In concluding the meeting – they both expressed the mutual interest to strengthen and promote international and regional cooperation.

In his ongoing official trip to New York for the 76th Session of the UNGA – President Solih has been meeting with the leaders of different countries on the sideline, for the purpose of further strengthening diplomatic ties with them.