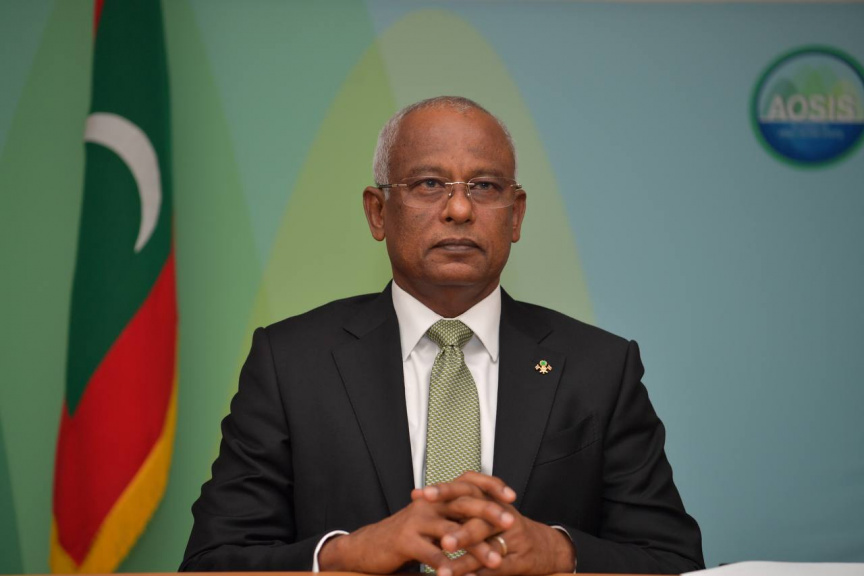 President Ibrahim Mohamed Solih has appealed to the international community for assistance in the progressive development of Small Island Developing States (SIDS).

He had made this statement during his intervention at the Alliance of Small Island States (AOSIS) Leaders' Summit 2021 - held virtually on the sidelines of the ongoing 76th Session of the United Nations General Assembly in New York City.

"Funds established to assist countries in special situations like SIDS need to be adequate, predictable and accessible," he added.

President Solih also discussed one of the biggest issues faced by SIDS; marine pollution. Referring to the Leader's Declaration adopted that the summit - President Solih said it demonstrated the urgency of these issues and the need for global support from developed countries, international financial institutions, the private sector and civil society. Again, he had called on the international community to take progressive action.

"We fully support the ongoing efforts to coordinate multilateral action to address the menace of marine plastic pollution including potentially through an international treaty," he had said.

Highlighting that the member states of AOSIS have an extensive track record of advocating for sustainable development to address climate change, among other unique vulnerabilities faced by them - President Solih said that even though they are small countries, their shared vision and unity makes them a loud and a powerful force for change.

The first-ever Small States Conference was held in the Maldives in November 1989 - where Maldives spearheaded efforts to form an intergovernmental organization comprising of lay-laying coastal and small island countries. The efforts bore fruit during the Second World Climate Conference in Geneva in 1990 - when AOSIS was formed.

AOSIS is a key advocate for SIDS and international environmental policy, with a particular focus on global climate change.