Expansion of cooperation in three areas between Maldives and Portugal discussed 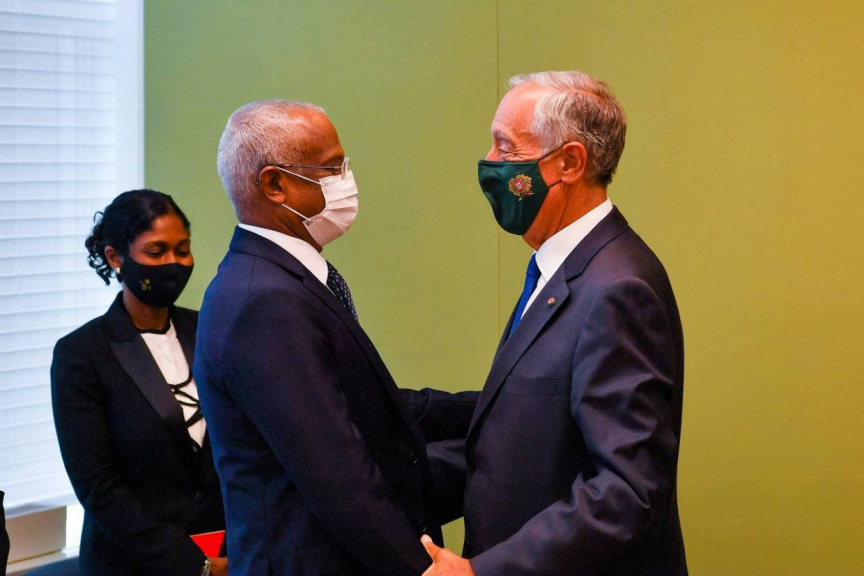 President Ibrahim Mohamed Solih has met with the President of Portugal Marcelo Rebelo de Sousa, on the sidelines of the 76th Session of the United Nations General Assembly (UNGA).

The meeting was held at the UN Headquarters in New York City, on Sunday. A variety of matters of mutual interest for both Maldives and Portugal were discussed during the meeting.

In this regard, both the leaders briefed each other on the current COVID-19 situation in their respective countries. President Solih highlighted the successful measures implemented by the Maldivian government to combat the pandemic – including the bold vaccination goals. He also added the decrease in cases has allowed the government to significantly ease the restrictions enforced to curb the spread of the virus. Portuguese President in turn, highlighted that 95 percent of the country’s population has been fully vaccinated.

The Portuguese President then congratulated Maldives on winning the Presidency of the 76th session of UNGA – adding that the Presidency represents the whole world in ongoing global efforts to rebuild economically and socially in the aftermath of the pandemic.

President Solih wished the event a success. Noting that the importance of eradicating plastic pollution and ocean conservation – he added that he hoped that the event leads to some creative solutions.

Both leaders also expressed interest in expanding existing economic relations. Portuguese President flagged three areas that both countries could expand cooperation in; tourism, renewable energy and digitalization. With regard to digitalization, he further suggested that the Maldives consider taking part in the upcoming technology conference, Web Summit.

President Solih reciprocated the Portuguese President’s interest in further solidifying cooperation in the tourism sector. He also expressed the interest to explore avenues to widen mutually beneficial investment opportunities with Portugal and the wider European Union.

Discussions also took place on collaborating in the area of blue economy – one that is of keen interest to both nations.

The meeting concluded with both leaders affirming their commitment to elevate the ties between Maldives and Portugal.

Maldives and Portugal established diplomatic relations 26 years ago – on February 9, 1955.