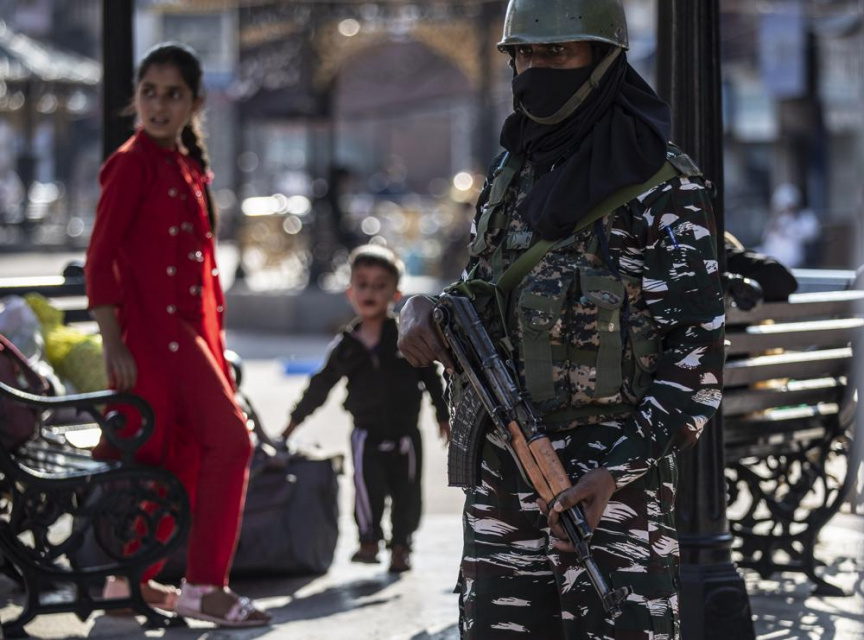 The killings come during an intensified government offensive against anti-India rebels in Kashmir, which is divided between nuclear-armed India and Pakistan and claimed by both. Rebels have also killed several members of India’s governing party in the region and carried out attacks on Indian troops.

Police and soldiers raided a village in the northwestern Sopore area late Monday and engaged at least three militants hiding in a house in a gun battle, police said.

Three militants were killed in the clash, which ended Tuesday, police said. They said troops recovered a rifle and two pistols from the site.

Residents said troops used explosives to blast a civilian house during the fighting, a common anti-militancy tactic employed by Indian troops in Kashmir.

On Monday, a team of 10 counterinsurgency police dressed in civilian clothes fatally shot the chief of The Resistance Front rebel group and his deputy in the region’s main city of Srinagar, officials said.

Inspector-General Vijay Kumar said the two, Abbas Sheikh and Saqib Manzoor, fired at the police but were killed in a brief retaliatory shootout. He called the killings a “big success” against militants in Kashmir.

Witnesses, however, said armed men cornered the two in a playground and killed them at close range in assassination style.

Police say the group is a front for Lashkar-e-Taiba, which India blames for a series of attacks, including a deadly assault in Mumbai in 2008 that killed at least 166 people.

Abbas was a senior rebel commander who had been arrested twice by government forces but rejoined militants fighting against Indian rule in the region. A police statement said he helped revive militancy in Srinagar and recruited at least seven men to his group.

Police said the two were involved in the killings of several pro-India political activists, police officials and civilians and also carried out attacks on government forces.

Rebels in Indian-controlled Kashmir have been fighting New Delhi’s rule over the region since 1989. Many Kashmiris support the rebel goal of uniting the territory, either under Pakistani rule or as an independent country.

India insists the Kashmir militancy is Pakistan-sponsored terrorism. Pakistan denies the charge, and most Muslim Kashmiris consider the insurgency a legitimate freedom struggle.