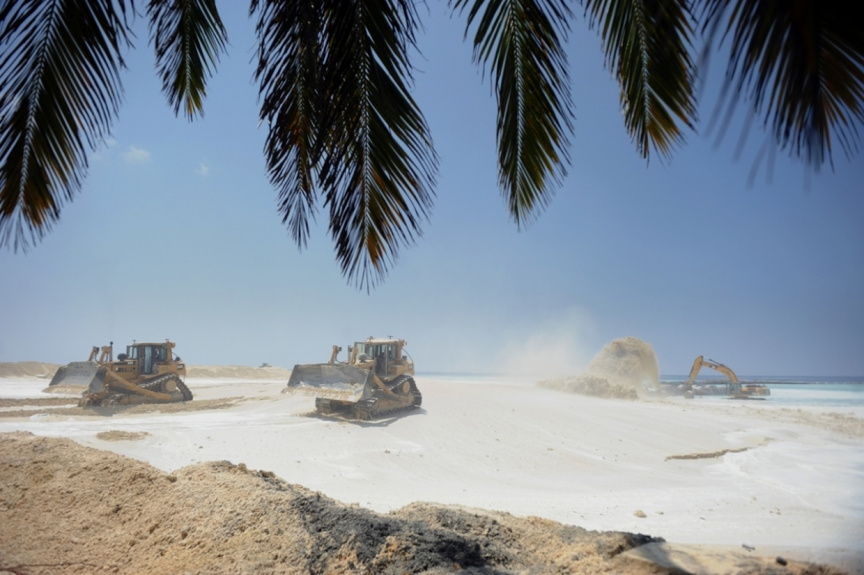 Dredging Association of Maldives (DAM) has expressed concern that the transfer of sand between islands has become a common practice in the dredging industry in Maldives, and has called on authorities to take action against such crimes.

DAM, an association which advocates for the combination of sustainability requirements with the demands of dredging applications in Maldives, made the appeal in a statement earlier this week.

DAM expressed concern that dredging is taking place for short-term economic and political gain rather than strategically planned development.

“Rather than a strategically planned development, dredging has been taking place in Maldives mostly for short term economic and political gain. Hence, the much needed social and environmental balance is far from being achieved,” said DAM, in its statement.

DAM noted that the Environment Impact Assessment (EIA) report completed in accordance with the EIA Regulation – a regulation enacted in 2012 based on the Environmental Protection and Preservation Act, is the only document that mainly guides the dredging activities in Maldives.

“Sadly, in many cases, the project activities do not follow the approved EIA report,” said DAM.

The association said that it has become common practice to transfer sand dredges for the purpose of one project to another island, for a different project – something which was not originally within the scope of the dredging project.

"It has to be noted that the Dredging and Reclamation Application is approved by EPA by issuing a letter which states the amount of sand permitted to be dredged as the fill material or the requirement of that specific project. This amount is estimated by undertaking accurate GNSS and hydrographic surveys prior to the beginning of the project. The total fill material estimated for one project is solely based on the requirement of that project, either for filling or to keep some remaining for a replenishment of the beach in a near future,” said DAM.  “EPA never approves an additional amount of dredging from one project so that in the future, under an unforeseen circumstance, it can be taken to another island for a use that has never been foreseen.”

DAM also noted that as per the Decentralization Act, there is a legal administrative boundary of every atoll and the island that encompasses the surrounding lagoons. No second or third party can benefit from these areas without knowledge and consent of the administrative councils.

The association said that therefore, sand dredged within one atoll for the purpose of usage within that administrative atoll, cannot be taken to another atoll or island without the full knowledge and consent of the respective administrative councils.

“The bottom line is that no dredging project is expected to yield extra material enough to be taken to another island given that the contractor has undertaken the project as per the issued Decision Statement by EPA. The amount of dredging is only approved to meet the requirement of that specific project, not to cater unforeseen situations that may raise throughout the country," said DAM. “If the contractor leaves a huge sand pile at the completion of the project, which has never been approved in the initial EIA report, the contractor has committed a crime punishable under the Environment Damage Liability Regulation."

The association urged respective authorities to take necessary action against such crimes.

Man who threatened Nasheed jailed for contempt of court