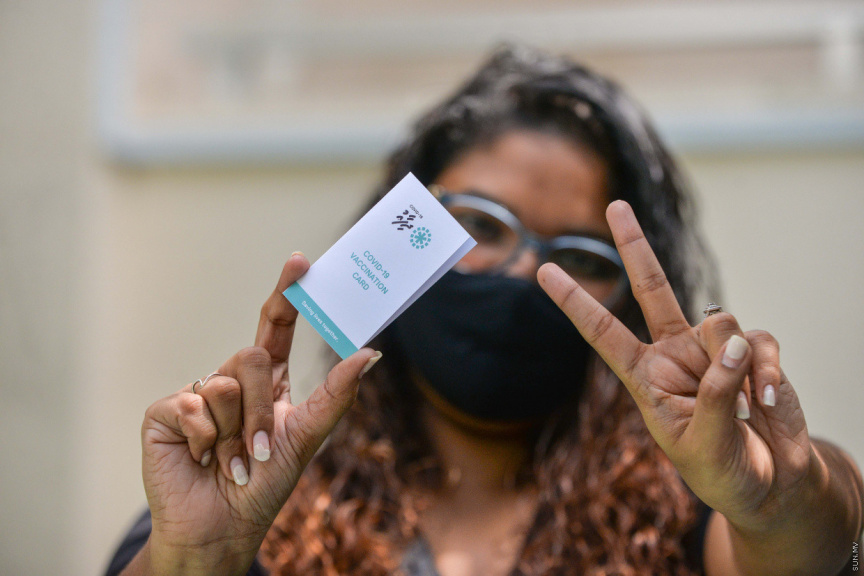 February 4, 2021: A woman poses for the camera after having received the first dose of the Covishield vaccine in the Maldives. (Sun Photo/Fayaz Moosa)

Concerns have been raised as the COVID-19 vaccination card issued in the Maldives as proof of vaccination has been considered inadmissible in several foreign countries – as the card does not specify the name of the country in which the vaccine is administered at.

Lots of locals who had traveled abroad have experienced this – have taken it upon social media to highlight the difficulties arising subsequently.

Accordingly, Maldivian Biomedical Scientists and Doctor Ibrahim Musthafa wrote in the tweet that he has was denied entry to a government office situated in the United Arab Emirates (UAE) as the vaccination card does not specify that it was issued by Maldivian health authorities. Moreover, when the QR code on the vaccination card is scanned – the information released therein fails to mention that it is a card issued by Maldivian health authorities.

Apart from Musthafa even, lots of locals who had traveled abroad to different countries have faced similar situations – where the validity of their vaccination card has been questioned. They have shared their experiences in social media – noting the difficulties faced due to this such as not being entitled to easements given to vaccinated persons abroad as well as having to do PCR tests constantly, with their own money.

Following the complaints, some members of the public have also noted on social media that that vaccine e-card issued through myHealth Portal has been considered valid in many foreign countries. Some also noted that it was not an issue of the vaccine card – but rather a problem arising as each country has its own regulations when it comes to the validity of vaccination cards.

The vaccination card issued in the Maldives comprises of the receiver’s name, national identity card number, birth date, address, name of the vaccine administered, and the name of the person administering the vaccine – none of which indicates that the card was issued by Maldivian health authorities as proof of vaccination.

Health Protection Agency (HPA) has not made an official statement regarding the matter yet – whereas they have also not disclosed whether the vaccination card can be used abroad as well.