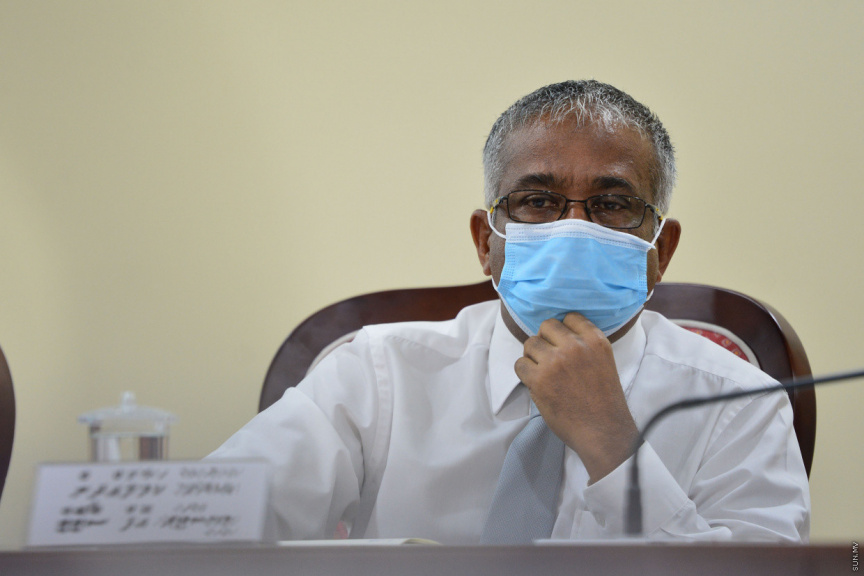 State Minister for Housing Akram Kamaluddin pictured during a meeting with the Parliament's National Development and Heritage Committee on March 4, 2021. (Sun Photo/Fayaz Moosa)

State Minister for Housing Akram Kamaluddin has requested to reconsider Maldivian Democratic Party’s (MDP) decision to disqualify him from competing in the party’s upcoming National Council elections – and ultimately allow him to compete.

Akram’s disqualification has been attributed as a case is submitted against him at the Anti-Corruption Commission (ACC) in connection to the MMPRC graft scandal – whereas he has been listed as one of the alleged beneficiaries of the stolen funds from MMPRC.

In a letter sent by Akram to MDP’s Chairperson Hassan Latheef, he noted that he had inquired ACC as to why his name had been listed – following which Akram claims to have them replied to him stating that ACC has no impending matters lodged against him.

He also added that he can only be disqualified from the National Council elections had ACC had requested any authority to take action against him in connection to the MMPRC scandal – whereas his name has not been sent any authority in this regard.

Akram also detailed that upon competition of their investigations into a case – ACC is mandated by law to inform the individual who must take responsibility in the case – whereas he has not been presented any such reports by ACC as of present.

In addition to this, Akram also noted that the decision to not allow him to contest in the elections is against MDP’s ideologies as changing the requirements of the contestants of the elections at the last minute is contrary to democracy.

Along with Akram, Sports Minister Ahmed Mahloof has also been disqualified from the elections – as he is also listed amongst one of the alleged beneficiaries of the stolen funds from MMPRC.