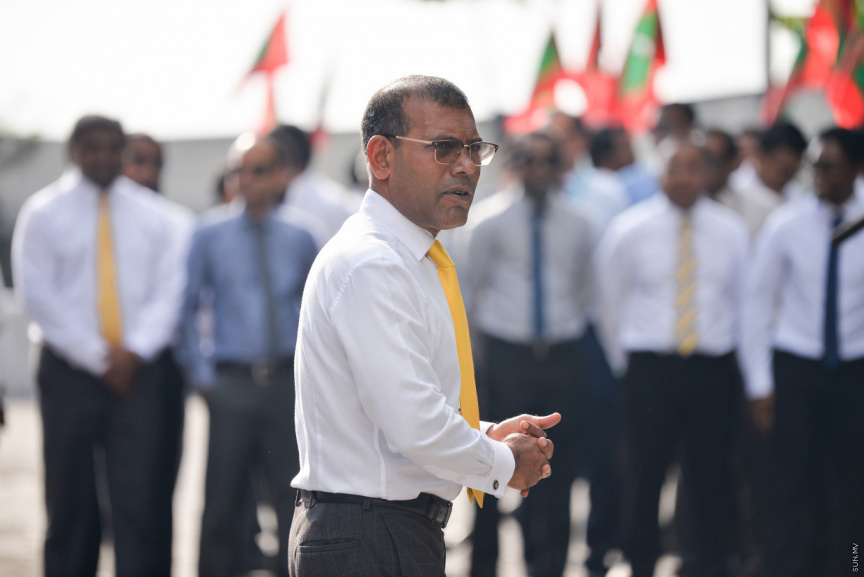 Parliament Speaker, former President Mohamed Nasheed has asked the Parliament to grant an extension to his leave, and allow him to remain overseas.

While the Parliament reopened for its third session of the year this Monday, Nasheed remains in the United Kingdom seeking treatment for the injuries he sustained in the assassination attempt on him back in May.

In a letter addressed to Deputy Speaker, North Galolhu MP Eva Abdulla, Nasheed said he and his family are hesitant to return to Maldives before the culprits behind the attack against him are arrested and brough to justice.

He asked for an extension to his leave, and to allow him to continue to reside overseas.

“Therefore, I ask the Honorable Parliament to extend my leave and accept my continued residence overseas, and facilitate it,” he said.

Nasheed expressed full confidence the Secretariat of the Parliament, headed by the Deputy Speaker, will run the affairs of the Parliament in accordance with the Constitution and parliamentary regulations and under the advisement of parliamentarians in his continued absence.

Nasheed also said he will continue to serve the Parliament and the State of Maldives from overseas, especially in work held in collaboration with the Inter-Parliamentary Union, Commonweath Parliamentary Association, and Climate Vulnerable Forum.

Opposition PNC’s deputy leader, Maduvvari MP Adam Shareef Umar responded to Nasheed’s letter by stating he accepts that the Speaker is unable to attend the Parliament.

“I wholeheartedly accept his statement that he is unable to attend the Parliament at this time,” said Adam Shareef. “But I believe that we, along with the 65 MDP parliamentarians here, need to accept that Speaker Nasheed has been denied the opportunity to serve this Parliament due to the dangerous terror attack against him on May 6 for over three months now.”

Adam Shareef said he does not believe Nasheed will be able to return to the Parliament the reminder of the year.

“Conducting parliamentary sittings without the Speaker here in Maldives will create a huge vacuum according to the parliamentary regulations as well,” he said.

Adam Shareef said he feels Nasheed’s absence at the Parliament, and called on authorities to find out the reasons for his hesitancy to return to Maldives and provide him with safety and protection.

The assassination attempt on Nasheed took place on May 6. A homemade remote-controlled IED was strapped to motorcycle parked nearby Nasheed’s residence, and was detonated just as Nasheed exited his residence and went to get in his car. Nasheed was thrown to the ground and sustained multiple shrapnel wounds, while three members of his security detail and two bystanders sustained minor wounds.

Police are investigating the case as a targeted terror attack to assassinate Nasheed, and have made 10 arrests. Charges have been filed against four.

Police said they found evidence suggesting the suspects to be ISIS sympathizers, but found no evidence directly linking them with the international terror organization.