MDP to request for 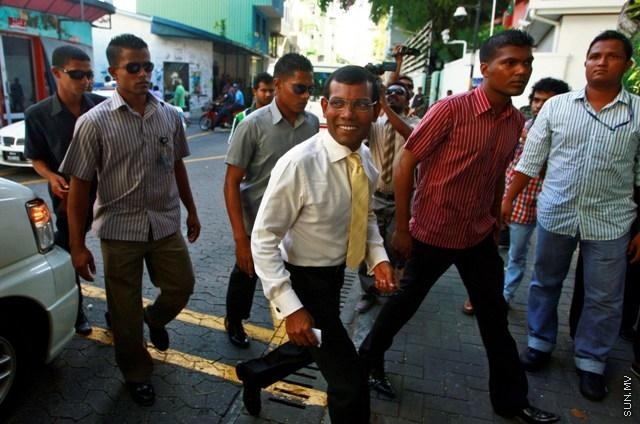 Maldivian Democratic Party (MDP) has said that a “legal order” has to be issued to summon the three Judges presiding over the trial against former President Mohamed Nasheed, to the Parliament Government Accountability Committee.

In a statement, MDP said last night that the Three Judges, Sujau Usman, Abdul Nasir Abdul Raheem and Hussain Mazeed had refused to attend the Committee when summoned.

“Therefore, the next step to take is to issue a legal order to summon them to the Committee,” said the statement.

It also informs that the Committee wishes to meet with the Judges in accordance with article 99(b) of the Constitution, to obtain information regarding the Committee’s investigation of the report of the Commission of National Inquiry (CNI).

The three Judges were first notified to attend the meeting on the first day of the trial against Nasheed, and then again last Wednesday at 11:00 - but the Judges refused to comply.

The Judges had said in their response sent to the Committee, that since they work as lower Court judges, they may not be able to answer questions about the report of the CNI. They had said that they will not attend the Committee unless ordered to do so by the Judicial Service Commission (JSC).

Members of Parliament and judicial sector officials differ in opinions on the issue of Judges being summoned the Parliament Committees.

Also, Speaker of Parliament Abdullah Shahid summoned Judges to a Committee on a previous occasion, when the Parliament Council General had advised the Speaker that Judges cannot be summoned to Parliament Committees.

A statement issued by the Parliament office in defence of Shahid’s decision said that the Constitution allows the Parliament and Parliament Committees to ‘summon any person to appear before it to give evidence under oath, or to produce documents.’

Meanwhile, Supreme Court and Judicial Service Commission have issued statements indicating that summoning Judges to Committees should not be allowed.

Article 141(c) of the Constitution also stipulates, ‘No officials performing public functions, or any other persons, shall interfere with and influence the functions of the courts.’