Minister Mahloof alleges political conspiracy, says he will not resign 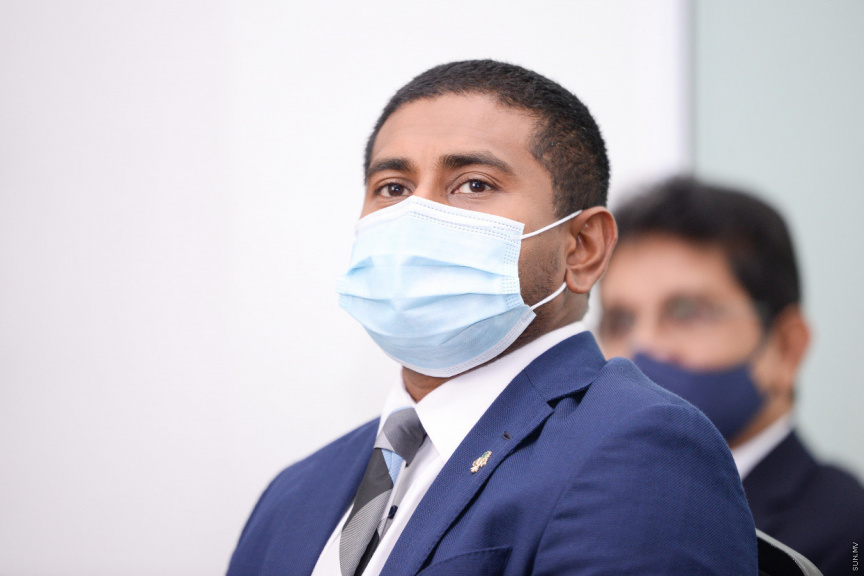 Sports Minister Ahmed Mahloof states he refuses to resign from his post, alleging that a group of politicians are conspiring against him to oust him from office.

In an interview to Sun on Tuesday, Mahloof said he previously announced his willingness to resign from his post if charged in connection to the Maldives Marketing and Public Relations (MMPRC) money laundering scandal because he had believed the Prosecutor General’s Office (PGO) would treat the case fairly.

Mahloof said he now believes the PGO is handling his case differently than other MMPRC cases.

Mahloof said that though Prosecutor General Hussain Shameem told the press it takes his office an average of six days to file charges, his case has been with the PGO for over 60 days.

He also said that the committee within PGO involved in prosecution of MMPRC cases has repeatedly stated that he cannot be charged in the case, and efforts are being made to hand over the prosecution to another party.

Mahloof said that it is evidence of involvement of a group of politicians in the case, and that he refuses to play into their hands by voluntarily resign from his post.

“When people were previously prosecuted in the MMPRC case, no effort was made to seek expertise from another party. I know very well this is being orchestrated by a group of politicians. I don’t want to indulge the people who orchestrated something as serious as this for political gain. I’ll be doing what they want if I resign. And there won’t be any charges either,” he said.

Mahloof said there are also issues with how the authorities obtained evidence in the case, alleging that the statement from a state witness, a Sri Lankan national, was extracted illegally.

Mahloof said that in his case, the Maldivian High Commissioner to Sri Lanka called the Sri Lankan national in question, and was also present during the Zoom session to take his statement.

He said it begs the question of influence.

“While a criminal investigation was conducted via Zoom, the High Commissioner was present at the Zoom meeting. Whether the Sri Lankan national was coerced. Where he was when they made the video call. Whether there were people beside him holding hand shackles. Whether he was given money. There wasn’t a lawyer present for sure. This is no minor thing. I’m talking about a major issue,” he said.

Mahloof said he intends to share the issue with President Ibrahim Mohamed Solih, and a final say regarding his continued service as Sports Minister lies with the President.

Anti-Corruption Commission requested the PGO for charges against Mahloof in connection to the Maldives Marketing and Public Relations Corporation (MMPRC) case on June 9.

ACC said Mahloof arrived at the Parliament on August 27, 2014, after travelling from Malaysia, for the sole purpose of voting for the SEZ Bill.

However, Mahloof said the PGO does not have any evidence to make the charges stick at court.

“They cannot show any evidence. They cannot do anything but embarrass themselves if they go to court. What they are saying today, will become an embarrassment to them the day they submit the case to court,” he said.