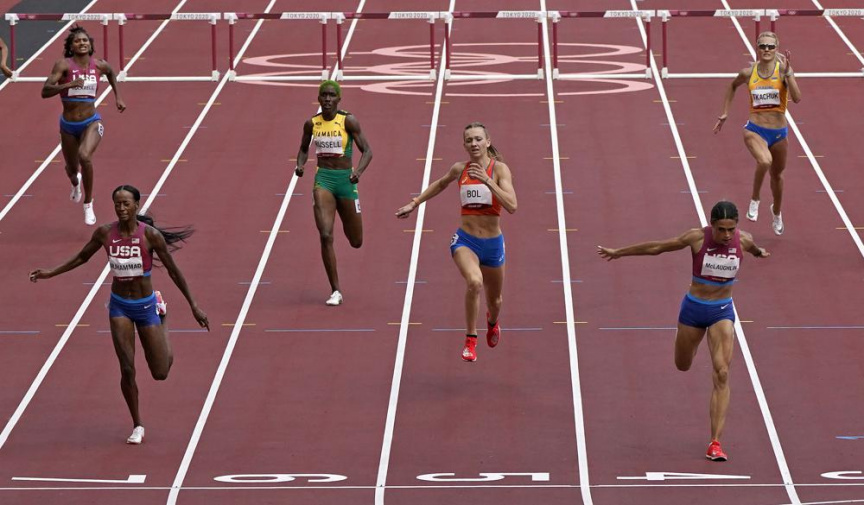 Sydney Mclaughlin, of United States wins the gold medal in the final of the the women's 400-meter hurdles ahead of Dalilah Muhammad, of United States, silver, and Femke Bol, of Netherlands, bronze, at the 2020 Summer Olympics, Wednesday, Aug. 4, 2021, in Tokyo, Japan. (AP Photo/Charlie Riedel)

McLaughlin came from behind after the last hurdle to top the defending Olympic champion. Muhammad’s time of of 51.58 also beat McLaughlin’s old record of 51.9, set at Olympic trials last month.

For McLaughlin, it was a muted celebration. She sat on the ground, gave a serious look toward the scoreboard, got up and sanitized her hands, then accepted a congratulatory hug from Muhammad.

Amazing as it was, this world record didn’t really surprise anyone.

McLaughlin and Muhammad, a New York City native who went to Southern Cal, have been trading the record, and the wins, for two years. Muhammad first broke the mark at U.S. Nationals in 2019, then lowered it again. to 52.16, at the world championships in Doha.

McLaughlin broke that record earlier this summer at Olympic trials, running her 51.90 to become the first woman to crack 52 seconds.

It felt inevitable that the mark would go down again on a fast track in perfect, hot-and-humid running conditions in Tokyo.

It was a lot to live up to for the women, whose race was even more eagerly anticipated. They exceeded expectations.

Starting from Lane 7, Muhammad burst out of the blocks and made up the lag quickly — too quickly? — as they cruised down the backstretch.

Slowly, steadily, McLaughlin drew even, and they were at nearly a draw when they reached the final 100 meters. McLaughlin scaled the last hurdle, then started inching away.

The .12-second margin was close — but not as close as in Doha, when McLaughlin lost by .07 in a race that changed her thinking.

She had burst onto the scene in 2016, a 16-year-old out of East Orange, New Jersey, who loved to tell the story about how she could juggle, and ride a unicycle, and do both at the same time. She could hurdle, too. To prove it, she earned a spot on the U.S. Olympic team in one of the most stacked events on the program,

Muhammad, already in her prime, won a gold medal in Rio de Janeiro. McLaughlin was out in the semifinal round. A great learning experience.

The 2019 races in Des Moines, then Doha, showed how good McLaughlin really was, but left her with an undisputable reality. Muhammad was better.

McLaughlin changed coaches, moving over to work with the famed Bobby Kersee, whose expertise has helped produce what could be its own wing of a track and field Hall of Fame: Jackie Joyner-Kersee, Florence Griffith Joyner, Allyson Felix.