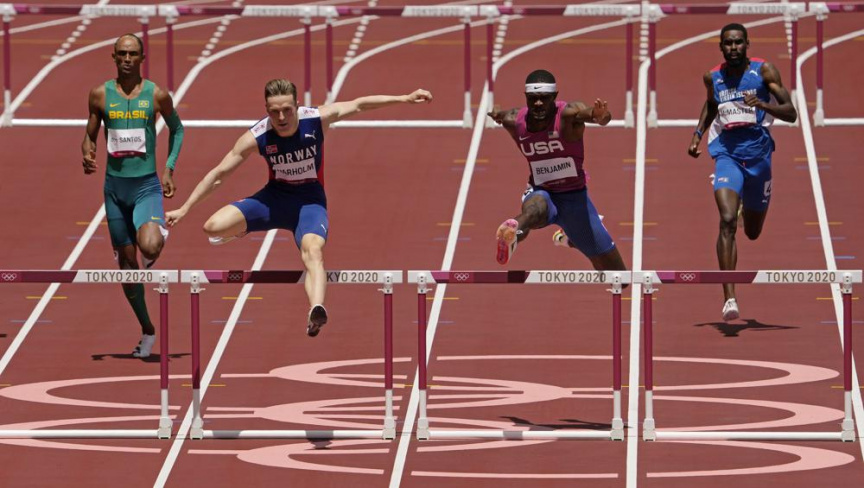 Karsten Warholm, of Norway, second left, clears the final hurdle before winning the gold medal ahead of Rai Benjamin, of United States in the final of the men's 400-meter hurdles at the 2020 Summer Olympics, Tuesday, Aug. 3, 2021, in Tokyo, Japan. (AP Photo/Charlie Riedel)

TOKYO (AP) — Karsten Warholm of Norway obliterated his own world record in the Olympic 400-meter hurdles Tuesday, finishing in 45.94 to break the old mark by .76.

One of the most anticipated races on the program more than lived up to the hype.

Second-place finisher Rai Benjamin of the United States finished in 46.17, a mark that also crushed the 46.7 that Warholm set last month.

Warholm tore open his jersey when he crossed the line first. He flashed the same mouth-gaping look of amazement as when he announced himself on the world stage with his victory at world championships in 2017.

Alison dos Santos of Brazil finished third in 46.72, as six of the eight runners broke either a world, continent or national record.

All in all, it was a race that more than lived up to expectations on a steamy afternoon at a mostly empty Olympic Stadium.

Amazing but not unexpected.

The hype for this showdown started building at U.S. Olympic trials in June, when Benjamin became only the fourth man to break 47 seconds with a run of 46.83 and pronounced he thought he had a low-46 in him.

Warholm responded a few weeks later by running the 46.70, and breaking the 29-year-old world record held by American Kevin Young since the Barcelona Olympics.