COVID-19 death at Dhuvaafaru sparks protests on the island 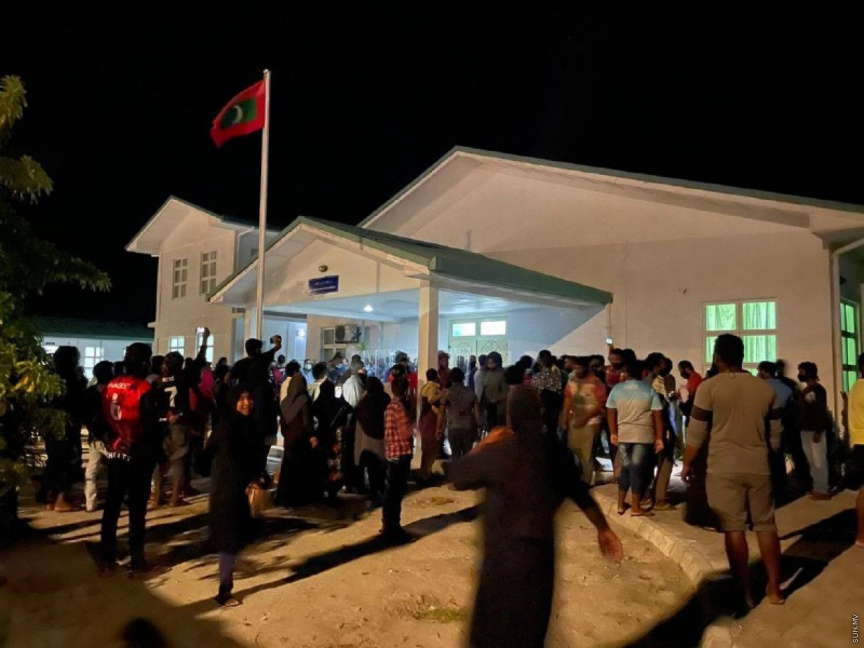 Residents of R. Dhuvaafaru protests at the island's Health Centre on July 29, 2021.

A COVID-19 fatality at R. Dhuvaafaru has sparked a protest on the island.

The latest COVID-19 fatality in the Maldives has been identified as a high-risk 59-year-old woman.

Former Dhuvaafaru Council President Ibrahim Naseer told Sun that the woman had been exhibiting symptoms for four days – but has not been attended to properly by healthcare personnel.

Hence, Naseer alleges that the death was the result of negligence by stakeholding authorities.

“She died tonight, after experiencing difficulties in breathing. She was taken to the Health Centre around 18:30 in the evening. While she was taken during a state where she was experiencing serious symptoms and was even considered a high-risk patient – a sea ambulance was unavailable for her transfer at the time requested. Every single time they had said it was on the way, on the way. She passed while waiting for the sea ambulance,” Naseer had said.

“Sea ambulance did not arrive even after calling them about 10 to 12 times. Every time they were called they kept saying they were on the way. So much time was wasted like this,” he further detailed.

Naseer also added that amongst all the islands in Raa Atoll, the COVID-19 situation is the worst at Dhuvaafaru – hence a sea ambulance being late and a patient not being properly attended to by healthcare personnel is a sign that Dhuvaafaru Council and other stakeholding authorities have failed.

“Health Centre and other stakeholding authorities’ negligence had caused today’s death. On an island that has a population of 5000 – only one doctor is available. The other one is quarantine,” he also noted.

Following today’s deaths, a large number of Dhuvaafaru residents are protesting at the Health Centre.

“It is a huge protest. About 95 percent of the population is in participation. They do have a valid reason to protest,” Naseer had said.

This death increases the number of COVID-19 fatalities in the Maldives to 221. It also marks the fourth fatality from Dhuvaafaru.

Prior to this instance, a child who has tested positive for COVID-19 had died in Male’ City following delays in the arrival of an ambulance. Many had raised their concerns over this death that was resulted from negligence by health authorities as well.