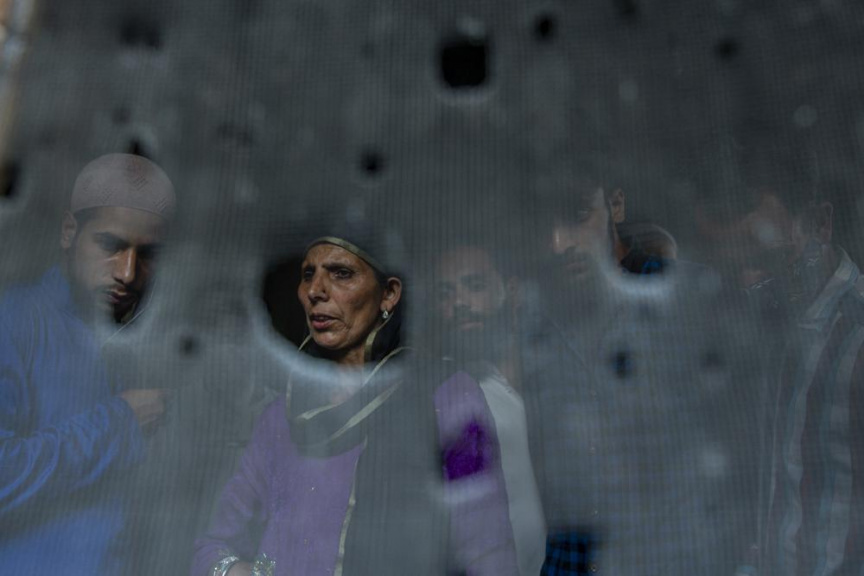 Kashmiri villagers are seen through the bullet ridden iron mesh of a window of the residential house where suspected rebels were taking refuge, after a gunfight in Pulwama, south of Srinagar, Indian controlled Kashmir, Friday, July 2, 2021. (AP Photo/ Dar Yasin)

SRINAGAR, India (AP) — Five suspected rebels and an army soldier were killed Friday in a gunfight in Indian-controlled Kashmir which triggered anti-India protests and clashes between government forces and local residents, officials said.

The gunfight erupted shortly after scores of counterinsurgency police and soldiers launched an operation based on a tip that militants were present in a village in southern Pulwama district late Thursday, police said.

As the fighting raged, anti-India protests broke out in the neighborhood in solidarity with the rebels. Police fired tear gas and shotgun pellets to stop scores of stone-throwing young men from marching in the area.

The protesters chants slogans such as “Go India, go back” and “We want freedom.” No one was reported injured in the clashes.

Government forces have stepped up operations against anti-India rebels in the region, which is divided between India and Pakistan and claimed in its entirety by both. Suspected militants have also carried out attacks on police and in one case killed two family members of a police official.

On Wednesday, Indian police said government forces killed three suspected militants in a gun battle and recovered a rifle and two pistols. However, family members of one of the slain men said that 17-year-old Zakir Bashir was picked up from his home, killed in custody and then presented as a militant who had died fighting.

Police insisted that the teenager had joined rebel ranks “just a few days before he was eliminated.”

Last week, suspected militants barged into the home of a low-ranking police official and fatally shot him along with his wife and their daughter. On June 22, assailants shot and killed a police intelligence officer in the region’s main city of Srinagar. Police blamed militants.

India’s military last week said it thwarted a major threat when it intercepted two drones flying over an army base in the region’s Jammu area, a day after suspected explosives-laden drones were used to attack an air base there.

Rebels have been fighting Indian rule since 1989, seeking to unite the territory, either under Pakistani rule or as an independent country.

New Delhi insists the Kashmir militancy is Pakistan-sponsored terrorism. Pakistan denies the charge, and most Kashmiris consider it a legitimate struggle. Tens of thousands of civilians, rebels and government forces have been killed in the conflict.

Officials now say no ban on animal sacrifice in Kashmir

Pakistan says India was behind bomb blast in Lahore