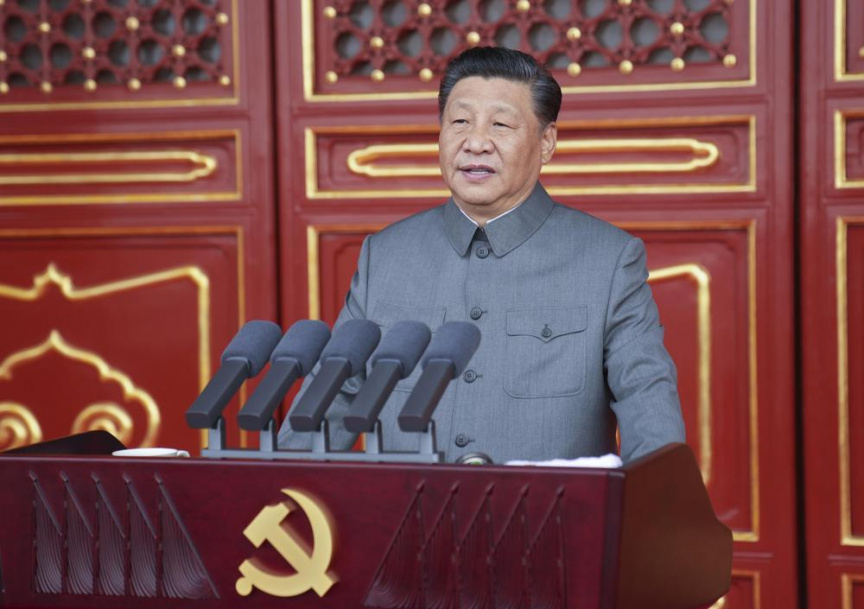 In this photo provided by China's Xinhua News Agency, Chinese President and party leader Xi Jinping delivers a speech at a ceremony marking the centenary of the ruling Communist Party in Beijing, China, Thursday, July 1, 2021. (Li Xueren/Xinhua via AP)

BEIJING (AP) — China will not allow itself to be bullied and anyone who tries will face “broken heads and bloodshed in front of the iron Great Wall of the 1.4 billion Chinese people,” President Xi Jinping said at a mass gathering Thursday to mark the centenary of the ruling Communist Party.

Wearing a grey buttoned-up suit of the type worn by Mao Zedong, Xi spoke from the balcony of Tiananmen Gate, emphasizing the party’s role in bringing China to global prominence and saying it would never be divided from the people.

Xi, also head of the party and leader of the armed forces, also said China had restored order in Hong Kong following anti-government protests in the semi-autonomous city in 2019 and reiterated Beijing’s determination to bring self-governing Taiwan under its control.

He received the biggest applause, however, when he described the party as the force that had restored China’s dignity after taking power amid civil war in 1949.

“The Chinese people are a people with a strong since of pride and self-confidence,” Xi said. “We have never bullied, oppressed or enslaved the people of another nation, not in the past, during the present or in the future.”

“At the same time, the Chinese people will absolutely not allow any foreign force to bully, oppress or enslave us and anyone who attempts to do so will face broken heads and bloodshed in front of the iron Great Wall of the 1.4 billion Chinese people,” Xi said.

Xi did not say what those forces were, but China is enmeshed in a deepening rivalry with the United States for global power status and has clashed with India along their disputed border. China also claims unpopulated islands held by Japan and almost the entire South China Sea, and it threatens to invade Taiwan, with which the U.S. has boosted relations and military sales.

Xi said the party would retain absolute control over its military wing, the People’s Liberation Army, which now has the world’s second-largest annual budget after the U.S. armed forces and has been adding aircraft carriers and sophisticated new aircraft, showcased in a flyover at the start of the ceremony featuring a squadron of China’s J-20 stealth fighters.

Events are being held across the country, including in Hong Kong, which is simultaneously holding commemorations of its 1997 handover from British to Chinese control.

China has cracked down hard on freedom of speech and political opposition in the territory, while rejecting all outside criticism and sanctions imposed on its leaders.

Thursday’s events are the climax of weeks of ceremonies and displays praising the role of the nearly 92 million-member party in bringing vast improvements in quality of life at home and restoring China’s economic, political and military influence abroad.

While the progress dates mainly from economic reforms enacted by Deng Xiaoping four decades ago, the celebrations spotlight the role of Xi, who has established himself as China’s most powerful leader since Mao.

Xi, 68, has eliminated limits on his time in office. He is expected to begin a third five-year term as party leader next year.

While Mao and other past leaders are also featured, the centenary celebrations appear designed to burnish Xi’s credentials as having achieved key breakthroughs in poverty alleviation and economic progress while raising China’s global profile and standing up to the West.

In seeking to capture more gains for the party on the world stage, Xi is setting up China for a protracted struggle with the U.S., said Robert Sutter of George Washington University’s Elliot School of International Affairs.

“In foreign affairs it involves growth of wealth and power, with China unencumbered as it pursues its very self-centered policy goals at the expense of others and of the prevailing world order,” Sutter said.

While the party faces no serious challenges to its rule, the legitimacy of its rule has been undercut by past disasters such as the mass famine of the Great Leap Forward in the late 1950s and early 1969s, the violent class warfare and xenophobia of the 1966-76 Cultural Revolution, and the bloody suppression of the pro-democracy movement centered on Beijing’s Tiananmen Square in 1989.

More recently, China has come under criticism and sanctions for detaining more than 1 million Uyghurs and and other Muslim minorities for political reeducation in the northwestern region of Xinjiang, and for imprisoning or intimidating into silence those it sees as potential opponents from Tibet to Hong Kong.

The party’s official narrative glosses over past mistakes or current controversies, emphasizing development, stability and efficiency — including its success in controlling COVID-19 at home — in contrast to what it portrays as political bickering, bungling of pandemic control measures and social strife in multiparty democracies.

The party’s determination to eliminate mention of past shortcomings shows it may not be as confident about its legitimacy to rule as it projects, said University of Miami China expert June Teuful Dreyer.

”What are they afraid of? In short, could this outsized self-orchestrated pat on the back be a sign of deeper insecurity?” Teuful Dreyer said.

While Mao called for the abandonment or outright destruction of traditional culture, religion, classes and social norms, the party now downplays its revolutionary history and “defines itself as representing all that is good in the Chinese tradition,” said Anthony Saich of Harvard University’s Kennedy School.

“The celebrations will try to legitimize Xi as the natural heir apparent to Mao Zedong, Deng Xiaoping, etc. and pave the way for the party Congress next year, Saich said.

“It will promote the sense of national pride in its achievements that form an important source of legitimacy in the current era.”

China bans men it sees as not masculine enough from TV

China limits children to 3 hrs of online gaming a week

India confirms 400K dead, half in past 2 months