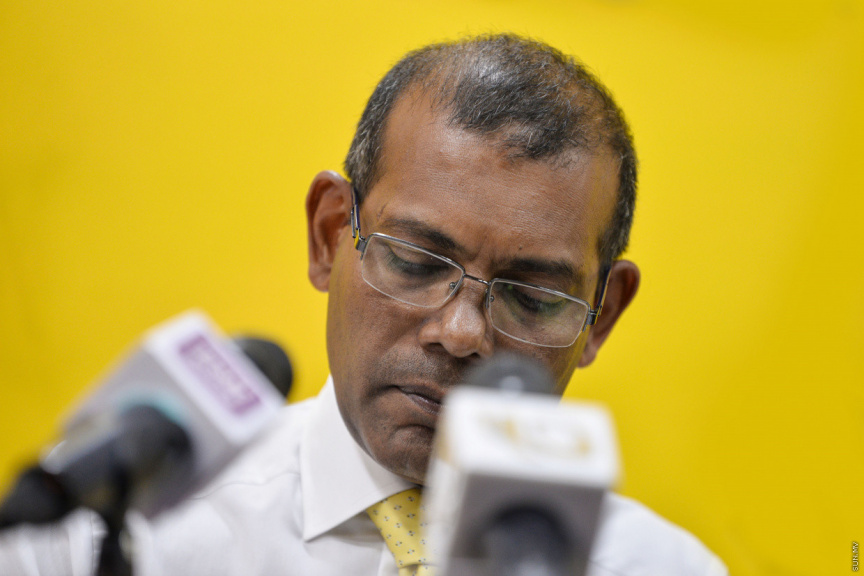 Speaker of the Parliament and former President Mohamed Nasheed during a press conference. (Sun Photo/Fayaz Moosa)

Speaker of the Parliament Mohamed Nasheed has hit out at MP for Alifushi Mohamed Rasheed Hussain, who has been alleged to have played a massive part in the rejection of an issue submitted to the Parliament's Ethics Committee backed by Nasheed.

MP Rasheed, belongs to the governing MDP, which is led by Nasheed. Nasheed requested the Ethics Committee to look into the issue of the Defense Ministry stating that specific individual officers of the army cannot be summoned to the Parliament's Committee on National Security Services inquiry into the May 6 bombing targeting Speaker Nasheed. The issue was rejected by the Ethics Committee, with the vote of MDP members on the Committee including MP Rasheed.

The Deputy Speaker further said that the government MP Rasheed supported so much, would remain in power even if MP Rasheed didn't conduct himself in such a manner before questioning whether the loyalty and sympathy MP Rasheed had towards Speaker Nasheed had expired.

MP Rasheed is the brother-in-law of President Ibrahim Mohamed Solih and even serves as the Secretary of the MDP PG Group. He is accused by supporters loyal to Nasheed of working for the President. Nasheed himself has alleged that President Solih lobbied for the rejection of the issue submitted to the Ethics Committee, something dismissed by the President who said that Nasheed would be aware that he wouldn't do such a thing.

MP Rasheed today appeared on the "Fashaairu" program of Raajje TV and denied the allegations made against him. He said that President Solih did not contact him on the day of the Ethics Committee meeting which rejected the issue. He also said that he had not contacted any lawmakers to lobby for the rejection of the issue.

He said that he was at the receiving end of false allegations and vile statements by some MDP members, before saying that he himself had done a lot of things for MDP.

MP Rasheed said that he was saddened by the vile allegations against him and even said that he had strong relationship with Nasheed and would never do anything to obstruct justice for Nasheed.

His interview was followed shortly by a tweet from Speaker Nasheed. Nasheed in his tweet said that MP Rasheed was well aware of the things he would do and say for political benefits.

"It is better for me if this person does not speak about the loyalty and care others have for me," said Nasheed.

Nasheed's words come at a time of heightened tension within the governing MDP, with the main cause being the parliament inquiry and the rejected issue of Nasheed.

Many supporters and lawmakers loyal to Nasheed have said that the issue was rejected by MDP lawmakers who got elected to the parliament with the sale of photographs of Nasheed, implying that Nasheed was the reason for their election success. Some have even said that the MPs behind the rejection did not have a speck of shame to work against Nasheed at a time when he was in need. Supporters have even gone a step further to question whether the inquiry into the terror attack against Nasheed could come out right.

Nasheed’s submissions for election made past deadline

'Removal of members will be reason for Pres' defeat'

'To withdraw govt. shares in Gan Airport if elected'