MP Azim: I did not resign, stepped aside from Committee to show I had no part in scandal 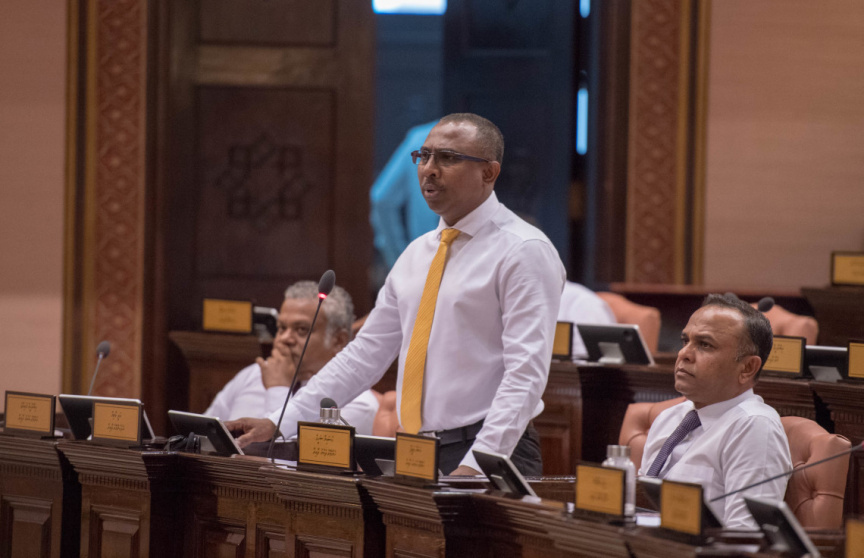 The ruling MDP's PG Group leader, MP for Central Henveiru Ali Azim has spoken out on his abrupt move away from the Parliament's Committee on National Security Services (241 Committee) as the Committee makes an inquiry into the MMPRC scandal.

MP Azim spoke with Sun last night regarding the move away from the Committee just a few days after the Committee received a list of complicit current and former state officials in the scandal.

MP Azim said that he did not resign by rather stepped aside from the Committee's work, for now, to show the public that he was not complicit in the scandal and had no part in it.

He was replaced by Deputy Speaker of the Parliament Eva Abdulla on the Committee. MP Azim said that he had informed the Committee Chair and MP for North Hithadhoo Mohamed Aslam of the resignation and replacement.

"No, I did not resign. Parliament regulations say that MPs can only move from one Committee to another with a signed document by me (PG Group leader). The document I gave, states that this particular individual will sit on the Committee until the end of the inquiry into the MMPRC scandal. So, it is not that I resigned..." said MP Azim.

Rumors have been circulating that MP Azim's name is one of the names on the list of around 300 complicit current and state officials of the MMPRC scandal.

On that point, MP Azim said that he had no idea whether his name was on the list and that he only stepped aside due to the rumors and because he wished to clarify that he was not complicit in the scandal.

MP Azim: If my name is there, that's shocking!

Further speaking, the PG Group leader of the governing MDP also denied that he had received any payoffs or bribes from the scandal and that if his name was there on the list of around 300 complicit current and former state officials, it was a "shock".

"If my name is there on the list of people who received payoffs, that's a huge shock. I have never been involved in the MMPRC scandal nor any other scandal, " said MP Azim.

He added that the Presidential Commission investigating the scandal had also not questioned him so far for any such involvement.

"If I am being accused, My word also has to be there. So far, The Commission has not questioned me at all," said MP Azim.

He said that the attempts to defame him by some will not turn out to be successful. Because he had no part in the scandal while those who were trying to show that he was complicit were trying to gain other motives, said MP Azim.

A joint Committee of the Parliament's 241 Committee and the Judiciary Committee are making an inquiry into the MMPRC scandal. A sub-Committee is now analyzing the list of complicit current and former state officials formed by the Presidential Asset Recovery Commission.

The list is believed to have the names of current and former judges, police officers and, government officials as well as parliamentarians.

The sub-Committee report is to be finalized on Tuesday to be forwarded to the main Joint Committee.

'Low voter turnout due to calls to free Yameen'