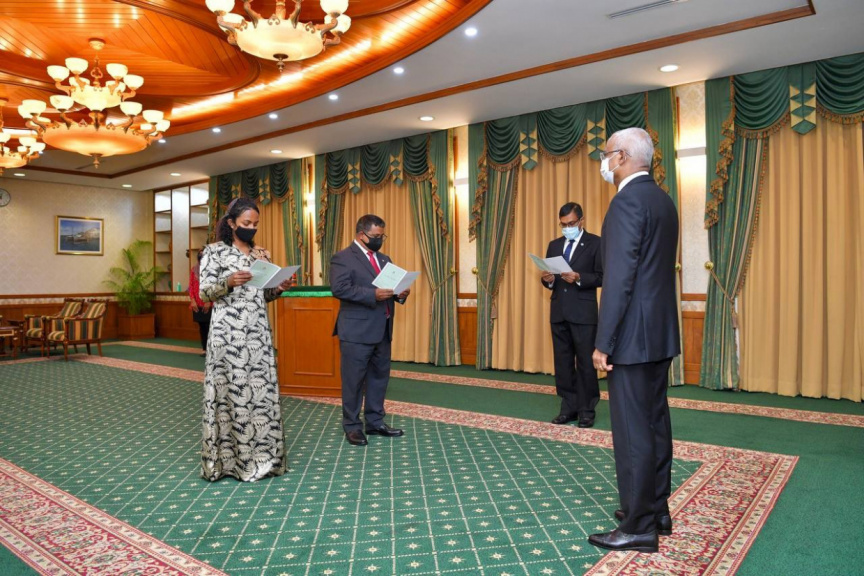 President Ibrahim Mohamed Solih has removed Environment Minister Dr. Hussain Rasheed Hassan from the post and appointed him as the Minister for Fisheries, Marine Resources, and Agriculture, before replacing him with President's Office Policy Director Aminath Shauna.

The two were sworn in at the President's Office today and their letters of appointment were also awarded today. They were sworn in by the Chief Justice of Ahmed Muhthassim Adnan.

President's Office Spokesperson Mabrouq Azeez announcing the cabinet shuffle stated today that the move was to improve the services and achieve pledged objectives.

Mabrouq has previously indicated such a cabinet shuffle could take place soon. The changes come as the governing MDP party faced a massive decline in popularity and faced major losses in the recently held Local Council Elections. After the elections, the President said that he would bring any necessary changes to the government in order to improve.

The President also changed the Environment Ministry to the Ministry of Environment, Climate Change, and Technology.

This means that the newly appointed Minister Shauna will also be tasked with the mandate of the now-dissolved Tech Ministry.

The Ministry has been without a head since the dismissal of Maleeh Jamaal from the post of Minister after a vote of no confidence back in March.

Economic Minister Fayyaz Ismail had been running the Ministry on an interim basis until today. The Technology Ministry was formed by President Solih after taking office. Maleeh faced stern criticism for his failures to achieve results and fulfill pledges such as bringing down the price of internet services in the Maldives.

Many including lawmakers also accused him of misusing his Ministerial benefits and criticized him for having close relations with opposition politicians and of deviating from his duties to other activities during his time in office.

The newly appointed Minister Shauna is a member of the governing main party MDP and has previously served as Under Secretary at the President's Office during the administration of President Mohamed Nasheed. Dr. Hussain Rasheed, who belongs to the Jumhooree Party, which is part of the governing coalition has previously served in a number of government posts. Shauna was replaced as the Policy Director by President's Office Under Secretary Ahmed Hamdhaan.