Police officers accused of excessive use of force on protesters suspended 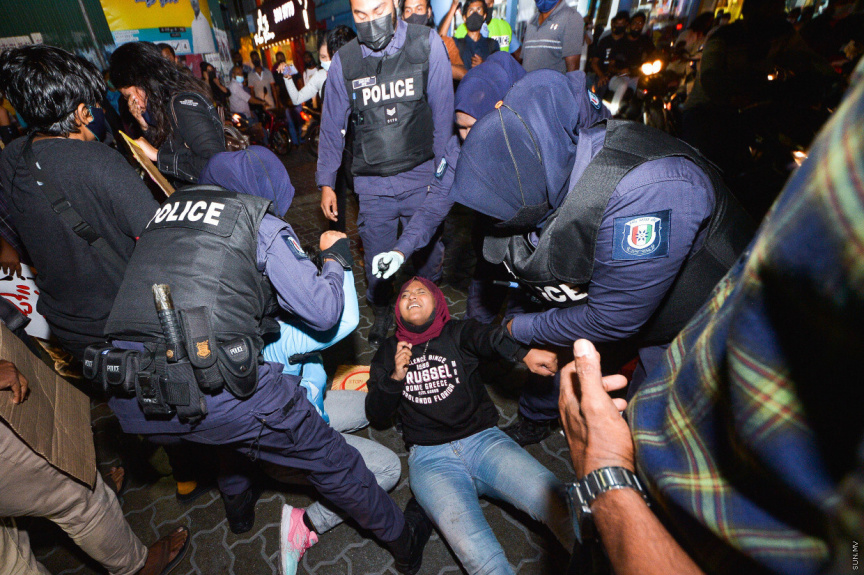 Protesters and police officers clash during a demonstration against sexual harassment in the workplace in Male' City on May 1, 2021. (Sun Photo/Fayaz Moosa)

Police officers involved in dispersing protesters demonstrating against sexual harassment in the workplace in the capital on Saturday have been suspended from their duties in frontline policing as they are under investigation for excessive use of force.

The police used force to dismantle the protest on Saturday night, pepper-spraying protesters at close range. Videos of protesters getting injured have gone viral, sparking condemnation.

Commissioner of Police Mohamed Hameed said on Sunday that an inquiry has been opened to investigate the actions of the police.

The police have issued a statement that complaints over the actions of police in controlling police will be investigated in accordance with standard procedure, and that any irregularity will be taken action against.

Police said that the use of force by police to dismantle Saturday’s protest is being investigated by Professional Standard Command and Use of Force Review Committee as a matter of high priority, and that the police officers involved have been suspended from their duties in frontline policing until the committee concludes its investigation.