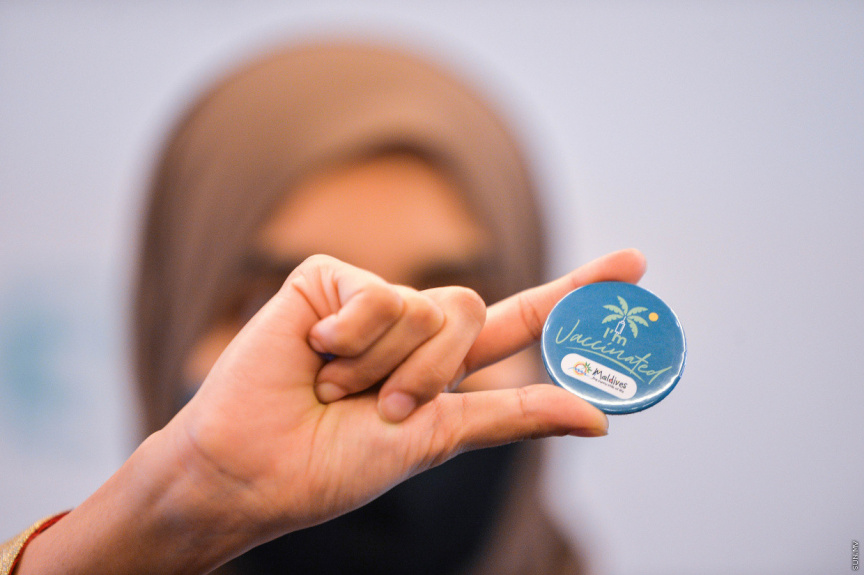 Badge awarded under the "I am vaccinated campaigm. (Sun Photo/Fayaz Moosa)

A designated campaign to fully inoculate all tourism industry workers has been commenced in the Maldives under the banner "I am vaccinated".

The campaign was launched by the Tourism Minister Dr. Abdulla Mausoom in a special ceremony held today at Hotel Jen.

The campaign launched by the Tourism Ministry and the Maldives Marketing and Public Relations Corporation (MMPRC) aims to make the Maldives the first nation to go for a fully vaccinated tourism sector.

MMPRC Managing Director Thoyyib Mohamed said during the ceremony that, "the purpose of the I am vaccinated campaign is to become the first nation to establish a fully vaccinated tourism industry by inoculating everyone in the industry, encourage everyone to get vaccinated."

Thoyyib further said that as the Maldives prepared to celebrated the golden jubilee of Maldivian tourism, the nation had experienced hard times as of recently. He noted that the MMPRC had worked to ensure that the Maldives remained on the travel radar of the world even during this time.

Tourists look for the safest location when traveling right now, according to Thoyyib who said that the full vaccination of the Maldivian tourism industry would mean that the faith of the travelers in the Maldives would be very much ensured.

A specially designated badge will be awarded to all tourism workers who have completed both shots of the vaccine and the MMPRC will also announce tourism establishments that are fully vaccinated against the virus.

FDA expected to OK Pfizer vaccine for teens within week

20% of those eligible fully vaccinated against COVID-19

20% of those eligible fully vaccinated against COVID-19