Coastguard: Sunken barge at a depth of 1,000, no real danger yet 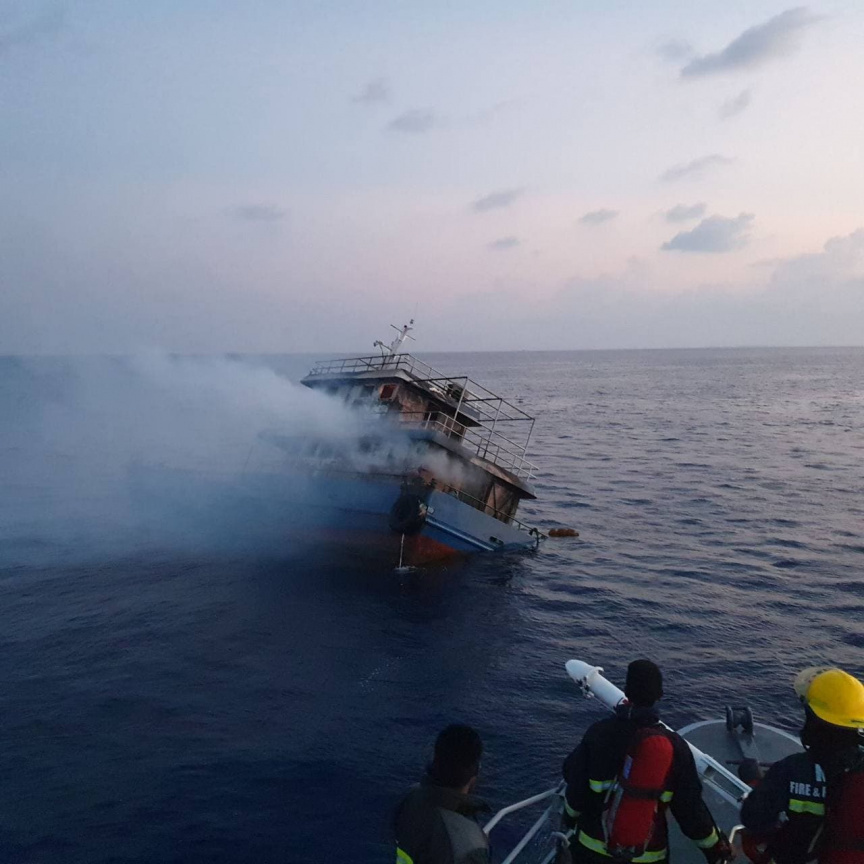 Fuel barge sinks following fire off the coast of Emboodhoo Finolhu on April 10, 2021.

The Maldivian Coastguard and the Environmental Protection Agency (EPA) have stated that there is no danger posed from an oil barge that sank in Maldivian waters yesterday due to a fire.

The barge named "Sea Star" was traveling from Male' City to L. Atoll when it sank near K. Enboodhoofinolhu with 60,0000 liters of diesel. A fire incident that happened on board the barge was reported around 17:50 yesterday.

Coastguard officials in a press conference today said that the barge had sunk to a depth of 1,000 to 1,400 meters. Commandant Coast Guard, Colonel Mohamed Saleem said that some signs of diesel were detected in the area in the morning of today. The commander said that it was most likely that the diesel had evaporated with the sunlight.

EPA Director General Ibrahim Naeem, speaking in the press conference said that no indication of an oil spill was detected in the area despite surveys by speedboat in the area. DG Naeem added that diesel was a very volatile fuel and evaporated soon after being exposed to the air and so posed little danger. Naeem said that the only danger was if the spill occurred onto a reef.

Col. Saleem said that it would be treated as an oil spill if the incident involved heavy oils, before stating that there was no real danger since the barge had sunk to a depth of 1,000. Col. Saleem added that the common procedure was if such a wreck was at a depth of 100 meters and that only a few nations had a capability of salvaging a vessel located so deep and that it was not a cost-effective thing to do to salvage the barge.

Authorities also assured that the situation would be monitored for any new dangers. The Coastguard also said that cleaning equipment for such a situation of an oil spill was received by Japan as a donation.