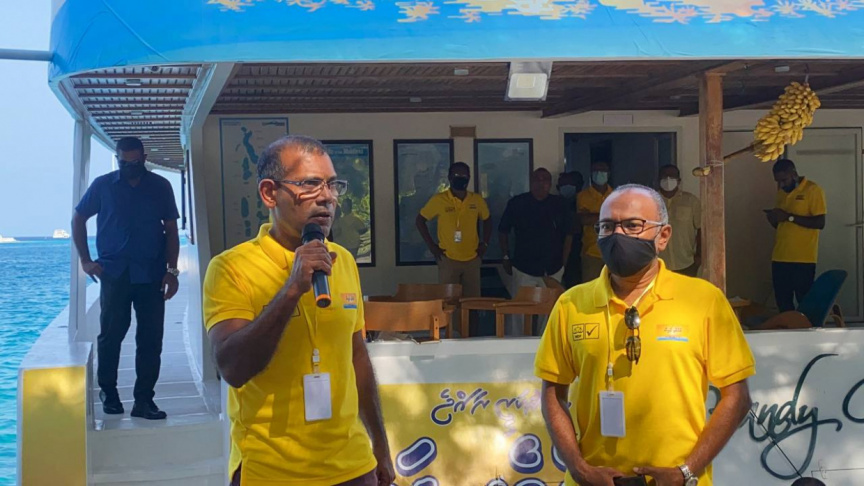 Nasheed made the comment while speaking to the press at the Hulhumale’ jetty prior to departure to attend the ‘Rahvehi Fathis Alivilun’ rally scheduled to be held at the AA. Rasdhoo lagoon on Thursday night.

Nasheed said that MDP has always been unflinching in face of every election, and has never believed any election to be too daunting.

“In Sha Allah, this party will win many seats in the Council Elections. We are competing for some 1,500 seats. I am sure we will take around 1,000 of those seats,” he said.

Nasheed said that he is confident MDP will take the mayoral seats in the four cities with a decisive majority.

“From Addu to Kulhudhuffushi and Fuvahmulah and Male’. MDP will, In Sha Allah, win the mayoral seats in these four cities easily, by a landslide,” he said.

Nasheed said that MDP will win the elections because it has always had a holistic approach, and because the party’s vision is clear to the Maldivian people.

Nasheed said that MDP does not wish to hear praise for its leaders, but rather complaints from the people.

The ‘Fahevi Fathis Alivilun’ rally will mark the conclusion of MDP’s campaign for the Local Council Elections. The rally will be attended by MDP’s leadership, Cabinet ministers, and some 120 party members who have left for Rasdhoo on four safari vessels.

'Problems facing Male’ can be solved tomorrow itself'

Nasheed: Vice President with MDP in campaign for LCE

'I will rises against efforts to make women powerless'