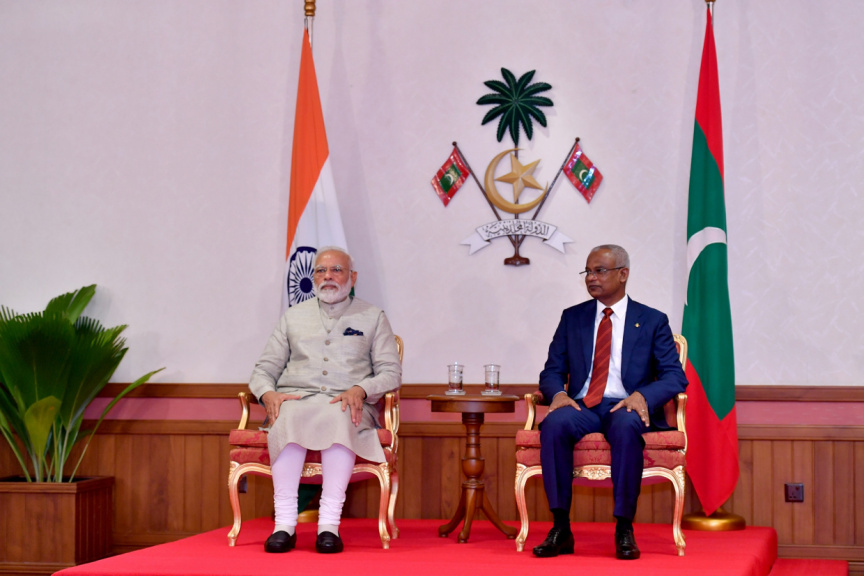 Maldivian Defense Ministry states the document which went viral on social media on Monday as a copy of the agreement between Maldives and India for the project to develop Uthuru Thila Falhu (UTF) base are fake documents.

The document was released by news outlet Dhiyares, which claimed they had received a copy of the agreement from a senior Maldives National Defense Force (MNDF) official.

The viral document states that Indian military personnel on active duty in UTF will be allowed to carry arms, will enjoy full diplomatic immunity, and that India must be consulted with if the facilities at UTF are to be leased for commercial use.

Defense Ministry issued a statement on Monday afternoon refuting the legitimacy of the documents.

Defense Ministry stated that the document is fake, and provided assurance the Maldivian military will not allow for any decision which may endanger the safety of Maldivian people or the freedom and sovereignty of Maldives.

Defense Minister Mariya Ahmed Didi tweeted soon after the Defense Ministry’s statement was released that she finds the spread of fake news by claiming to be from sources within Maldivian military unacceptable.

“Attempting to slander Maldivian military officers to serve a political purpose is highly reprehensible and cowardly,” she said.

Maldives and India signed the agreement to develop a harbor and modern naval dockyard in UTF on February 21, during Indian External Affairs Minister Dr. S. Subrahmanyam Jaishankar’s visit to Maldives. MNDF has previously provided assurance Indian military personnel will not be stationed in UTF.

Maldivian government has been hit with criticism over the UTF agreement, fueled by allegations from the opposition that the agreement will allow Indian military personnel to be stationed in the area, that India will enjoy exclusivity over the dockyard, and that the government is keeping the agreement confidential to hide such inflammatory arrangements.

Parliament approves Hamid for Police Board