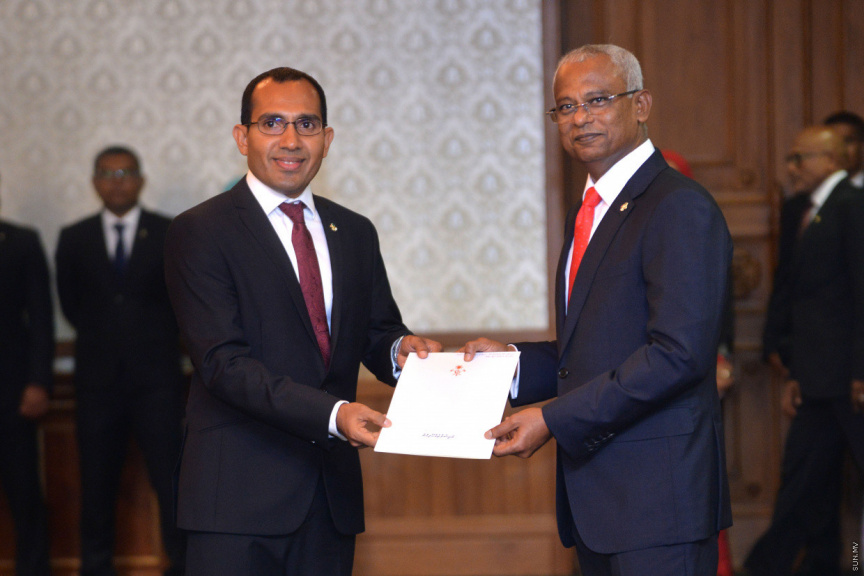 November 17, 2018: Maleeh Jamaal is pictured with President Ibrahim Mohamed Solih after being sworn in as a cabinet member. (Sun Photo/Ahmed Awshan Ilyas)

President Ibrahim Mohamed Solih said on Wednesday that he believes it to be the best course of action to discuss with the President before initiating no-confidence motions within the Parliament and dismissing Cabinet ministers.

The comment comes after Mohamed Maleeh Jamal was dismissed as Minster of Communications, Science and Technology in a no-confidence motion initiated by ruling MDP’s parliamentary group last week.

President Solih, who had never previously publicly talked about the dismissal, was asked about the move during a press conference on Wednesday evening.

President Solih said he believes the best approach is to discuss with him before initiating no-confidence motions against members of his Cabinet.

He said that he will dismiss Cabinet ministers if he finds there to be lack of confidence in them, and has done so in the past – referring to his decision to dismiss former Tourism Minister Ali Waheed.

“The best way if a parliamentarian loses confidence in a Cabinet minister is to bring it to me,” he said.

President Solih said that in Maleeh’s case, he was sent a letter signed by the entire MDP parliamentary group declaring their lack of confidence in Maleeh.

President Solih said that lack of confidence in a Cabinet member is nothing new, and that MDP’s parliamentary group had passed decisions to dismiss Cabinet ministers on numerous occasions during the first MDP administration. He said that such issues were delt with through discussion, and that he believes that to be the best approach.

“However, such issues were resolved at the time by discussing with those in power at the time, as an internal matter. Therefore, this is how it should be delt with in the future as well. That’s the best way,” he said.

President Solih said that those the members of his Cabinet may belong to different political parties, his administration remains one.

“All parties in the coalition and all members of the parties must work to uphold this. This was decided by the people,” he said.

“NO IMMEDIATE PLANS ON RUNNING FOR A SECOND TERM, FOCUS IS ON DELIVERING PLEDGES”

President Solih was also asked about whether he believed a five-year presidential term to be sufficient enough time for a leader, and about his plans for re-election.

He responded that he has no immediate plans on running for a second term, and that his entire focus at present is on delivering his pledges.

“You cannot serve the people if the day after you come to power, you decide to run for a second term. What I am doing after I came to power is trying to deliver my pledges to the people,” he said.

President Solih said that he will not find acceptance if he talks about running for a second term without delivering his pledges first.

“I, In Sha Allah, am not doing that. I am trying to deliver my pledges first. I don’t have any other thought at present. Its not right that I should talk about my rule without delivering my pledges,” he said.

Pres. to travel to Qatar on March 14 to reinstate ties