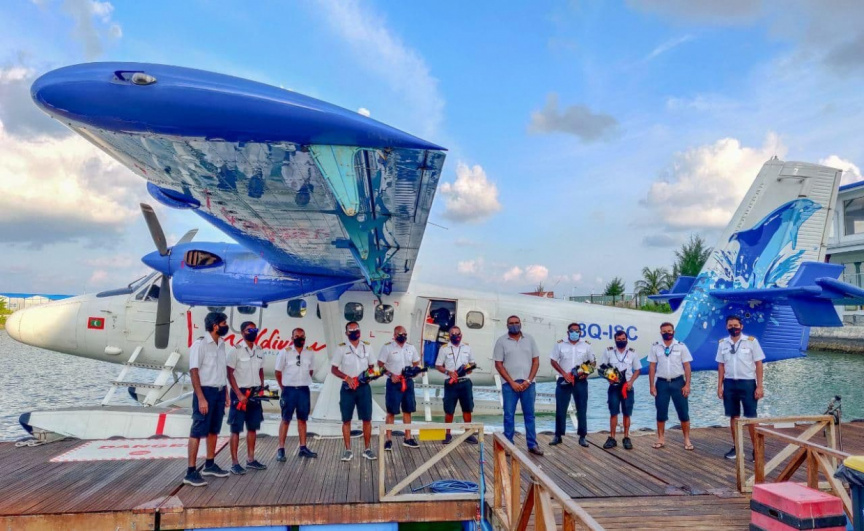 The crew of a Maldivian seaplane that traveled to India. (Photo/Maldivian)

Seaplane pilots of Maldivian are refusing to attend work after opposing a decision of the management of Maldivian.

Sun has learned that the pilots started the strike early this morning. The pilots are on strike after Maldivian’s management terminated the Chief Pilot Captain Mustafa Mansoor. The pilots are demanding that Captain Mansoor be reinstated.

Seaplane pilots of the national carrier also sent a letter to the Managing Director of Maldivian Ahmed Mihaad yesterday expressing their discontent over the termination of Captain Mansoor.

In the letter, the pilots described the decision as unacceptable.

“We found him to be a proactive self-starter who is highly motivated, with exceptional learning capabilities, duty-bound, a committed team player with strong conceptual knowledge of seaplane operations and activities which is assigned to,” read the letter regarding Captain Mansoor.

The letter also read that the chief pilot should be well versed in dealing with the subordinates and has to be someone who will be generally accepted by the crew, before going on to state that the irresponsible removal of Captain Mansoor will result in the loss of peace and harmony in seaplane operations.

The letter finally concluded by stating that, “we do not accept the unreasonable decision by the DFO to remove him (Captain Mansoor) from the post.”

The letter to Managing Director Mihaad was signed by “All seaplane pilots and engineers.”

Another concern of the pilots informed by sources, state that the pilots are disgruntled over the wage cuts imposed due to COVID-19 which have still not been reversed.

Maldivian’s PR and Communications Manager Moosa Waseem has also confirmed that some pilots were refusing to attend work. However, Moosa added that the strike by some pilots would not hinder seaplane operations.

Moosa added that Captain Mansoor was let go due to restructuring processes of the company operations. He said that Maldivian would keep on doing all it can to enhance the operations of the company.