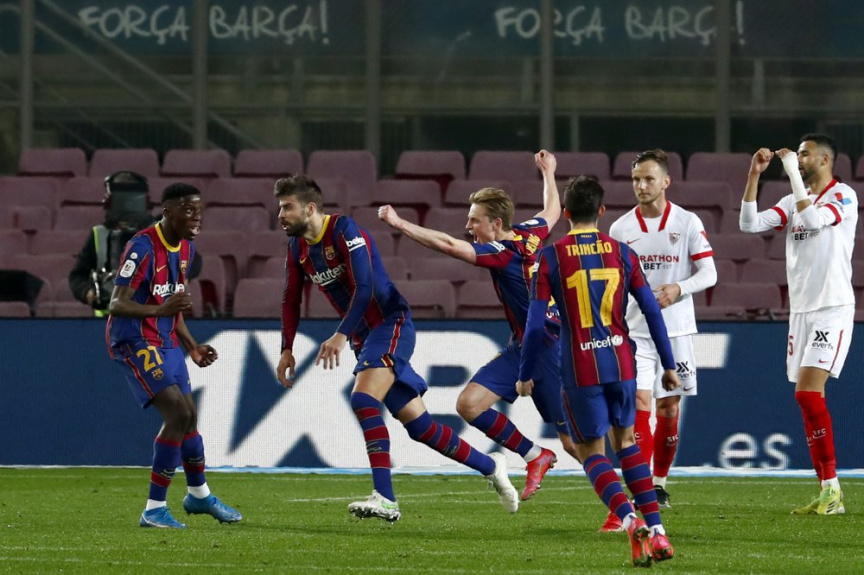 MADRID (AP) — Two weeks ago, Gerard Piqué and Antoine Griezmann were heatedly arguing with each other in a big loss to Paris-Saint Germain in the Champions League that deepened Barcelona’s crisis.

On Wednesday, the two were celebrating together after Griezmann set up Pique’s stoppage-time goal that allowed Barcelona to reach the Copa del Rey final.

Pique’s goal helped secure a 3-2 aggregate victory over Sevilla, easing some of the pressure on the embattled club that two days saw former president Josep Maria Bartomeu get arrested by Catalan police investigating possible irregularities during his administration.

“Piqué showed that he is one of the leaders of this team,” Barcelona coach Ronald Koeman said. “He is good on set pieces and it was a great cross for a goal in a very important moment.”

Goalkeeper Marc-André ter Stegen had kept Barcelona in it by saving a 73rd-minute penalty kick that would have practically ended the team’s chances of advancing.

Ousmane Dembélé opened the scoring early for Barcelona, which will be trying to win a record 31st Copa title.

“We believed until the end,” Barcelona defender Jordi Alba said. “This gives us a huge morale boost.”

The victory comes four days before the club holds its presidential elections to try to move on from one of its worst crises ever.

Sevilla was trying to return to the Copa final for the first time since 2018, when it lost to Barcelona. The five-time Copa winner also lost to the Catalan club in the 2016 final.

This season’s final will be on April 17 at the La Cartuja Stadium in Seville.

Levante hosts Athletic Bilbao in the other semifinal on Thursday. The teams drew 1-1 in the first leg in Bilbao.

Barcelona made it to the Copa final for sixth straight seasons before being eliminated by Athletic in last year’s quarterfinals.

Barcelona got off to a fast start and Dembélé scored with a superb shot into the top corner from outside the area in the 12th minute.

Sevilla was awarded a penalty aftera foul by Óscar Mingueza on Lucas Ocampos in the 73rd, but the forward’s shot from the spot was stopped by Ter Stegen. The away goal would have forced Barcelona to score three more times to advance.

“It was a decisive moment,” Koeman said. “If they equalize it would have been complicated to score three goals. We had the confidence in our goalkeeper.”

Sevilla midfielder Fernando was sent off for a foul in stoppage time, and a few moments later Piqué — who appeared to be injured at the end of the game — netted the second goal with a header into the corner after a well-placed cross by Griezmann.

The two were caught complaining with each other in the 4-1 loss to PSG in the first leg of the round of 16 of the Champions League two weeks ago.

The second leg will be next week in Paris.

“To reverse a 4-1 result is different,” Koeman said. “We will go there to try to win the match and we will see if there’s a chance of advancing.”

Playing with a man advantage in extra time, Barcelona was in control and added to the lead with Braithwaite’s diving header from close range five minutes into the first half.

The Copa may be Barcelona’s only chance to end its title drought. In addition to the big loss in the Champions League, the Catalan club is five points off the lead in the Spanish league.

Barcelona is coming off one of its worst seasons in more than a decade. It went without a trophy for the first time since 2007-08, and the embarrassing 8-2 loss to Bayern Munich in the quarterfinals of the Champions League threw the club into turmoil.

Bartomeu’s arrest was related to “Barçagate,” in which club officials were accused of launching a smear campaign against current and former players who were critical of Bartomeu and others. Bartomeu was freed on Tuesday but still hasn’t been cleared by authorities.

Bartomeu and his board of directors resigned in October amid the former president’s fallout with Lionel Messi, who had his request to leave the club denied by Bartomeu. Barcelona has been led by a caretaker board since then.

The coronavirus pandemic also hasn’t helped Barcelona, which is mired in debt of more than 1 billion euros ($1.2 billion).

Sevilla, sitting fourth in the Spanish league, was coming off a nine-game winning streak in all competitions but has won only one of its last four games.