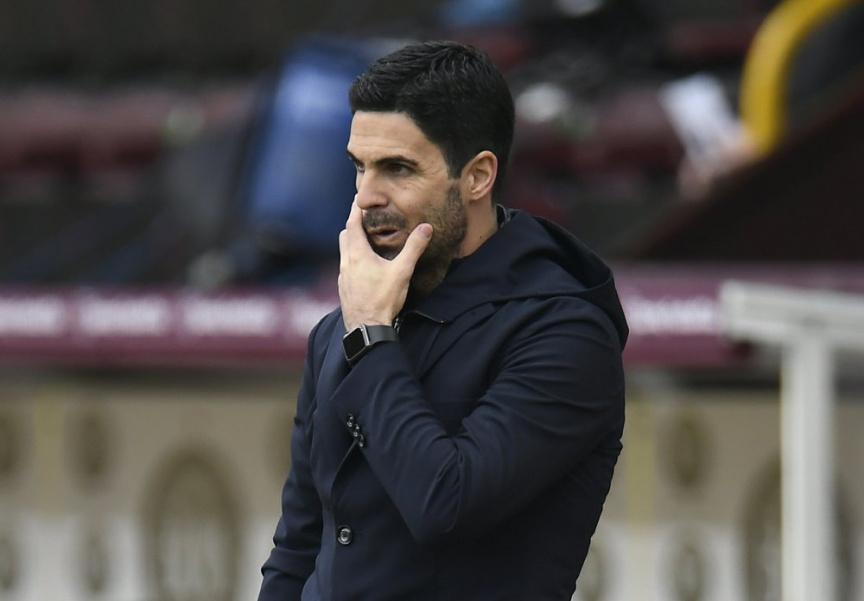 Arsenal’s bold approach of playing the ball out from the back since the arrival of Mikel Arteta in December 2019 has drawn plenty of praise and led to a number of wonderfully constructed goals.

It comes with obvious risks, however, and that was highlighted in the equalizer the team conceded in a 1-1 draw at Burnley in the Premier League on Saturday that left Arsenal’s chances of qualifying for European competitions even more unlikely.

The ball ended up striking Wood on his hip and careering into the net, the unwitting scorer looking slightly sheepish as he celebrated his goal.

Things often seem to go wrong for Xhaka when he plays Burnley. He was sent off in the teams’ meeting at Emirates Stadium in December and also in their game in January 2017.

His eight errors leading directly to goals since the start of the 2016-17 season is the most of any outfield player in the Premier League in that period.

Arsenal is nine points off the Champions League places with 11 games remaining. Its best chance of getting into the competition next season lies in winning the Europa League, where the team has reached the last-16 stage.

One team heading for the Champions League is Leicester, even with its growing list of injuries.

A header from Daniel Amartey at an 87th-minute corner completed Leicester’s comeback in a 2-1 win at Brighton that lifted Brendan Rodgers’ team above Manchester United and into second place.

Kelechi Iheanacho began the recovery, lifting a deft finish over Robert Sanchez in the 62nd minute to cancel out Adam Lallana’s goal in the 10th for relegation-threatened Brighton.

Leicester has a seven-point buffer to fifth-place Everton in the race to finish in the top four. The team hasn’t played in the Champions League since the 2016-17 campaign, missing out last season after a late collapse.

Injuries sustained by Harvey Barnes, James Maddison, James Justin and Jonny Evans over the past month have hit Leicester hard but the team is showing resolve, coming from behind to draw at Burnley in midweek after also falling behind early.

With United playing Manchester City in the derby on Sunday, there’s a decent chance Leicester will be staying in second place at least until next weekend.

Southampton is facing a few more weeks without Danny Ings after the England striker was forced off with another injury early against last-place Sheffield United.

It didn’t stop Southampton winning 2-0, though, for a first victory in 10 games to halt its fall into a relegation fight.

A penalty by James Ward-Prowse was followed by a fierce strike from outside the area by Che Adams, the replacement for Ings, as the Saints won for the first time in two months.

Ings’ groin injury took some of the gloss from the result, however. The striker, who has had dreadful luck with injuries in his career notably at Liverpool, has already had two spells out of action this season.

Aston Villa and Wolverhampton struck the goal frame three times between them and there was also an incredible miss from barely a meter out in the teams’ 0-0 draw.

Wolves’ crossbar shook twice in the opening 15 minutes from fierce shots by Ollie Watkins and Ezri Konsa, while Conor Coady headed the ball against the post in the second half.

The most agonizing miss was still to come, though, with the ball rolling across the face of goal from Coady’s attempt for Wolves and Romain Saiss contriving to lift the ball over the crossbar from almost right on the goal-line.

Villa is really lacking a cutting edge without captain and star midfielder Jack Grealish, having also been kept scoreless in losing to Sheffield United in midweek.

Villa is six points off the European positions.