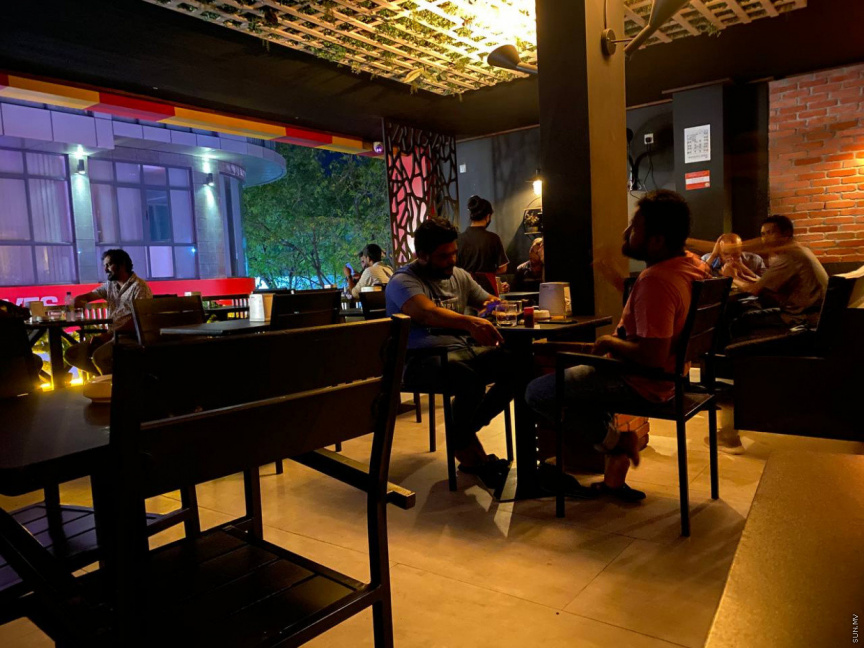 Health authorities have announced additional measures to control the COVID-19 outbreak in greater Male’ region, including a ban on dine-in services at cafes, restaurants and tea shops starting 8 pm.

The new measures were announced during a press conference by Health Emergency Operations Center (HEOC) on Thursday.

HEOC spokesperson Dr. Nazla Rafeeg said the additional measures will be in effect for a one-week period starting Saturday, February 27.

During the period, cafes, restaurants and tea shops in the greater Male’ region will be allowed to open for dine-in services up until 8 pm, while takeaway and delivery services will be allowed up until 10:30 pm.

The changes will affect cafes, restaurants, tea shops and other establishments that serve food in Male’, Hulhumale’, Vilimale, Thilafushi and Gulhifalhu.

Speaking during Thursday’s press conference, Dr. Ahmed Shaheed from the Technical Advisory Group (TAG) said due to the large number of people who spend long periods of time in cafes and restaurants talking to each other without their masks on, obtaining services from such establishments have been identified as a high-risk activity.

Following the emergence of the third wave of COVID-19 in Maldives, authorities reimposed measures which were lifted after the infection rate had subsided following the lockdown in 2020, including a curfew and a ban on vehicular traffic in the greater Male’ region.

Dr. Shaheed said on Thursday that analysis of the weekly infection rates show existing measures are not producing the outcomes authorities hoped for.

“Looking at the graph, there is little sign changes with these measures. Weekly infection rates remain above 900 cases. Therefore, we see from this graph that the existing measures are not producing sufficient outcomes,” he said, presenting graphs which show changes from the rollout of measures implemented in face of the third wave.

Meanwhile, positive cases among those who present to flu clinics with symptoms have risen by five percent.

The rollout of the new measures comes after Health Minister Ahmed Naseem warned the COVID-19 outbreak in Male’ is “completely out of control”, and requires stricter measures to combat.

Maldives has 19,364 confirmed COVID-19 cases, including 184 new cases this Thursday. 145 of the new cases were identified from the greater Male’ region.

COVID-19: 10 islands outside Male’ under monitoring