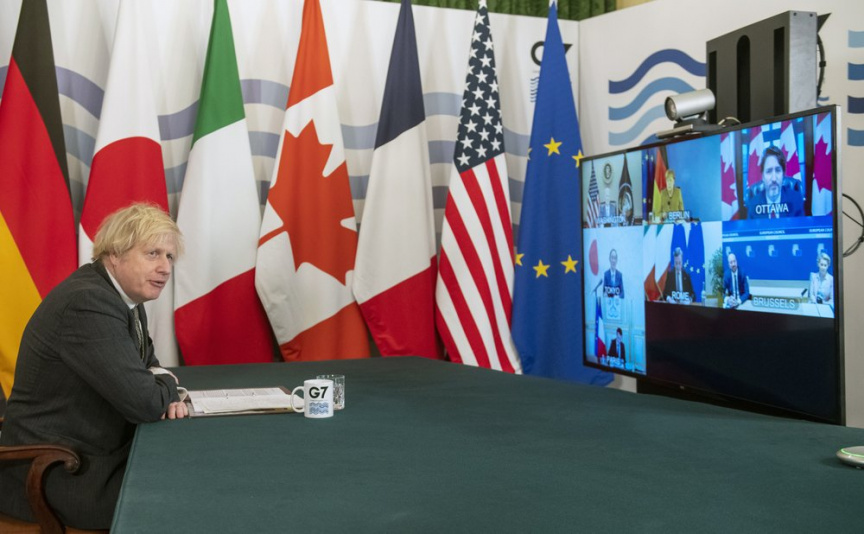 LONDON (AP) — Leaders of the Group of Seven economic powers promised Friday to immunize the world’s neediest people against the coronavirus by giving money, and precious vaccine doses, to a U.N.-backed vaccine distribution effort.

But the leaders, under pressure over their vaccination campaigns at home, were unwilling to say exactly how much vaccine they were willing to share with the developing world, or when.

Chancellor Angela Merkel said after the G-7 leaders held a virtual meeting that fair distribution of vaccines was “an elementary question of fairness.”

But she added, “No vaccination appointment in Germany is going to be endangered.”

After their first meeting of the year -- held remotely because of the pandemic -- the leaders said they would accelerate global vaccine development and deployment” and support “affordable and equitable access to vaccines” and treatments for COVID-19. They cited a collective $7.5 billion from the G-7 to U.N.-backed COVID=19 efforts.

“This is a global pandemic, and it’s no use one country being far ahead of another,” British Prime Minister Boris Johnson said as he opened the virtual summit with the leaders of the United States, France, Germany, Italy, Canada and Japan. The U.K. holds the G-7 presidency this year.

“We’ve got to move together,” Johnson said, speaking from the prime minister’s 10 Downing St. residence to the other leaders in their far-flung offices. “So, one of the things that I know that colleagues will be wanting to do is to ensure that we distribute vaccines at cost around the world.”

Wealthy nations have snapped up several billion doses of COVID-19 vaccines, while some countries in the developing world have little or none.

G-7 leaders are eager to avoid looking greedy — and don’t want to cede the terrain of vaccine diplomacy to less democratic but faster-moving countries such as China and Russia.

Johnson, whose country has reported almost 120,000 virus-related deaths, promised to give “the majority of any future surplus vaccines” to the U.N.-backed COVAX effort to vaccinate the world’s most vulnerable people.

But Foreign Office Minister James Cleverly said it was “difficult to say with any kind of certainty” when or how much Britain could donate.

French President Emmanuel Macron gave a firmer target, saying Europe and the U.S. should allocate up to 5% of their current COVID-19 vaccine supplies to the poorest countries quickly.

“This is worth an enormous amount. It is worth our credibility,” Macron said after the meeting,

“If we can do this, then the West will have a presence” in African countries, he said. If not, those countries will turn to Chinese and Russian vaccines and “the power of the West will...not be a reality.”

Macron’s office said France was ready to hand over 5% of its doses but would not give exact numbers or a date.

As the African continent awaits delivery of doses through COVAX, an African Union-created vaccines task force said Friday that it would be getting 300 million doses of Russia’s Sputnik V vaccine in May. The AU previously secured 270 million doses from AstraZeneca, Pfizer and Johnson & Johnson for the continent of 1.3 billion people.

The governments of Canada and the European G-7 nations are under pressure to speed up their domestic vaccination campaigns after being outpaced by Britain and the U.S.

Asked later Friday about Macron’s proposal, Germany’s Merkel said that “we have not yet spoken about the percentage.”

“We haven’t yet spoken about the timing” either, the chancellor told reporters in Berlin. “That still has to be discussed.”

Development and aid groups welcomed the commitments but said rich Western countries needed to do more, and soon.

Gayle Smith, chief executive of anti-poverty group the ONE Campaign, said “world leaders are finally waking up to the scale of this crisis.”

“It beggars belief that in the midst of a global pandemic a handful of countries have accumulated over a billion vaccines more than they will need, while 130 countries have no vaccines at all,” she said.

The summit marked Biden’s his first major multilateral engagement since taking office. America’s allies hope that U.S. re-engagement with the world following the “America first” years under former President Donald Trump will mean a more coordinated response on issues such as the pandemic and climate change.

Biden signed the U.S. up to the COVAX initiative, which Trump refused to support, and has pledged to distribute $4 billion in U.S. funding to the program.

The G-7 meeting — and a speech by Biden at the Munich Security Conference on Friday — comes the day the United States officially rejoins the Paris climate agreement, the largest international effort to curb global warming. Trump pulled the U.S. out of the landmark accord in 2017.

The Biden administration also said it was ready to join talks with Iran and world powers to discuss a return to the 2015 deal to curb Tehran’s nuclear ambitions, which was repudiated by Trump.

In a joint statement reflecting the United States’ re-embrace of international institutions, the G-7 leaders vowed to “make 2021 a turning point for multilateralism and to shape a recovery that promotes the health and prosperity of our people and planet.”

They said post-pandemic economic recovery efforts must put the fight against climate change and dwindling biodiversity “at the center of our plans.”

A full G-7 summit is scheduled to take place in June at the Carbis Bay seaside resort in southwest England.

Death of vaccinated elderly under investigation